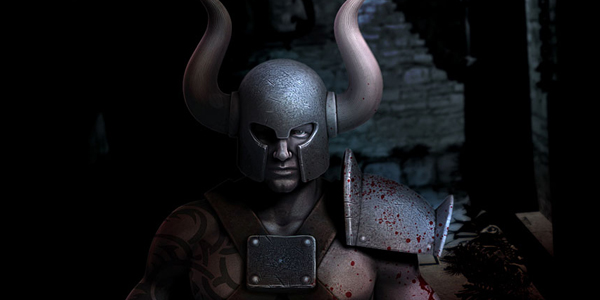 Based on Game Workshop’s long out-of-print tabletop wargame of the same name, Warhammer Quest has hit iOS, repackaged into a dungeon crawler that retains all the charm of the source material while applying it a way that accessible to the mobile gaming audience. 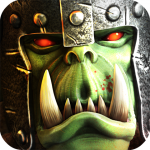 Developer Rodeo Games doesn’t try to reinvent the dungeon crawler genre by any means here.  Rather, they focused on delivering a classic adventure experience that’s both streamlined and elegant.  Warhammer Quest is certainly one of the better adventure titles available for your mobile device as, while it delivers a huge amount of content for the money and maintains the look and feel of an epic undertaking, the individual quests are delivered in bite-sized pieces that are perfect for an app store title.

Starting with a brief tutorial, players are introduced to their band of heroes: a Wizard, Norse Marauder, Wood Elf, and a Dwarf Iron-Breaker, with three others (so far) available as paid downloadable content.  These adventurers will traverse the Old World, which is a bit like the Warhammer Universe’s answer to Middle Earth, looting dungeons, battling countless monsters, and visiting towns to trade goods and accept new quests.  Each town or settlement you encounter has at least one scripted questline to advance the game’s story, but most of the missions you will encounter come in the form of dynamically-generated alerts on your map that, while optional, offer players a way to gain more experience and scrounge for additional items.  The town menu itself is simplistic and offers little more than a market and temple where heroes can pray for the favor of the gods (for a fee of course).  On the “Hardcore” difficulty setting, towns also serve as a place to recruit additional heroes as members of your party can, and will, permanently die. 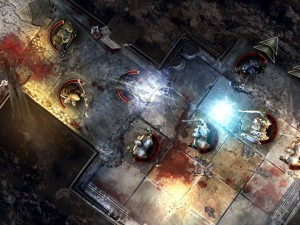 Regardless of what your current quest is, whether it’s a rescue mission or a contract to slay a beast who’s been threatening the locals, you will find your warriors at the entrance of a dungeon.  As you begin to navigate inward, you find that each of these randomly-generated labyrinths are revealed one room at a time.  As you move to the end of a tile, the darkness gives way to light and any number of evil creatures hiding in the next area are revealed and must be engaged immediately.  A rather remarkable amount of detail went into both the character models and environments in Warhammer Quest.  Even though the locales can easily look similar given general stone wall construction of the dungeons themselves, Rodeo Games filled each room with a fair amount of detail, from skeletal remains of previous travelers to varied ornamental detail and realistic-looking textures.  Even the characters, who are only seen from a bird’s-eye-view reflect the equipment you’ve outfitted them with and are easy to distinguish from one another thanks to their unique builds. 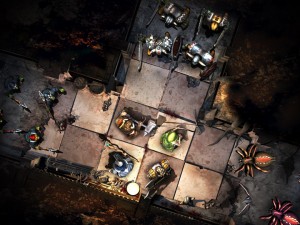 The gameplay itself is where the title shines the most.  Touchscreen controls can often be incredibly frustrating in action/adventure titles due to their inaccurate nature, especially when combat gets frantic.  This title doesn’t suffer from these issues as you only progress as quickly as you choose.  All movement and combat takes place on a turn by turn basis.  You are able to simply tap on the character you wish carry out an action and then double click an area to initiate – whether that means sending them to a specific destination or to attack a foe.  Similarly, enemies will have their opportunity to attack you on their movement phase.  All the necessary info you need regarding character stats is easily visible at all times and your currently equipped inventory is only a quick swipe away.  To access your full inventory and equip items, you only need to rotate your device from to portrait mode.  As soon as you are finished perusing your loot and hold the device in its landscape orientation again, you are immediately zipped back to where you were.  This is such an intuitive feature, I can’t help but wonder why I’ve never seen it incorporated into a mobile game before. 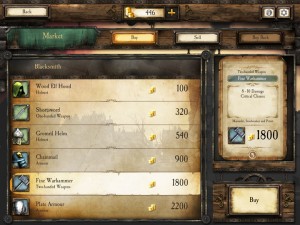 As combat makes up the vast majority of the game, it does get a bit repetitive, but the variety of enemies and upgradeable weaponry help to keep the experience consistently entertaining.  There is also an ambush mechanic present that increases the odds of your party being subject to a surprise attack the longer they remain in the dungeon, encouraging players to push forward using fewer turns.  As fun as slaying monsters and collecting loot is though, there is one area where the game stumbles, and that’s the in-app purchases.  I don’t take issue with the availability of additional characters for a price – after all, part of the fun of the original tabletop game was in buying and painting all the individual characters.  What I’m less a fan of is the ability to purchase in-game gold with real money.  The title works just fine as a grind to collect enough gold over time to afford a weapon you’ve been eyeballing for weeks.  Giving players the option to essentially cheat their way to the best gear in the game just feels wrong.  Even if you choose not to take advantage of this, the knowledge that a fortune in gold is just a click away cheapens the experience.  What exacerbates this is the fact that random encounters in towns and during your travels can rob you of gold you’ve earned and there’s nothing you can do about it. 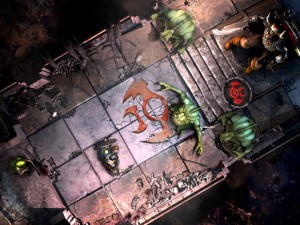 Considering how long it takes to build up a useful amount of gold pieces, it can come across that the developer is trying to make purchasing more a bit too appealing.

That gripe aside, this is a beautiful game for the iPhone/iPad (a universal app for $4.99) which supports cloud saves, meaning you can go back and forth between devices without losing your saved progress.  It helps that I’m able to game with a tablet at home and then discreetly dungeon crawl on my phone all day during my travels and at the office.  Warhammer Quest may not be the most original addition to the genre, but it’s one of the most superbly crafted and entertaining adventure titles to hit the app store since its inception.