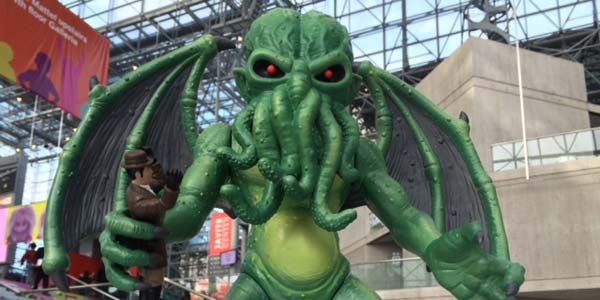 The dread lord Cthulhu will descend upon SDCC this summer.

I sadly did not get to see Warpo’s incredibly exciting 12″ Cthulhu figure in person at Toy Fair, but I’m still super excited by their news about the giant size retro figure.  Just last week we found out Warpo was officially moving forward with the figure, clearly the centerpiece of their awesome Legends of Cthulhu series… and now we know exactly when Cthulhu will make his debut.

Warpo’s figure will first be available at San Diego Comic Con this summer, then coming to other retailers in the back half of the year.  He’ll carry a price tag of around $100, but after having some time to really play around with the first series of 3.75″ figures, I think he’ll be well worth that price.  Cthulhu looks awesome, harkening back to the Rancor, the Inhumanoids and other great monster toys of the past, and I am very excited to land one for my collection as soon as possible.

Here’s the inside word straight from Warpo:

Since indie toy company Warpo first entered the collectible toy market last year with a highly successful Kickstarter for their Legends of Cthulhu, 3.75” retro action figures, the next figure on the minds of toy enthusiasts has been a 12” Cthulhu, and that figure became a reality at Toy Fair this weekend as the paint master of 12” Cthulhu made its debut.

The 12” Cthulhu will be the centerpiece of the Legends of Cthulhu collection, with pose-able wings, 9 points of articulation, and pliable “gripping hands”, suited for grasping 3.75” action figures to their doom. The 12” Cthulhu figure will be packaged in an early 1980s-style, full-color box, featuring brand new artwork by the masterful artist Ken Kelly.

“This is the Legends of Cthulhu toy we wanted to make from day one,” says Eric LeFeber, Warpo’s VP of Marketing. “He will not only be the centerpiece of the Legends of Cthulhu collection, but will also stand proudly along other vintage, over-sized monsters in your collection, like the Kraken from Clash of the Titans, or the Rancor from Star Wars.”

The 12” Cthulhu is expected to first be for sale at San Diego Comic Con 2015, and then subsequently comic, toy, and hobby shops nationwide, and will have an MSRP of $99.99. 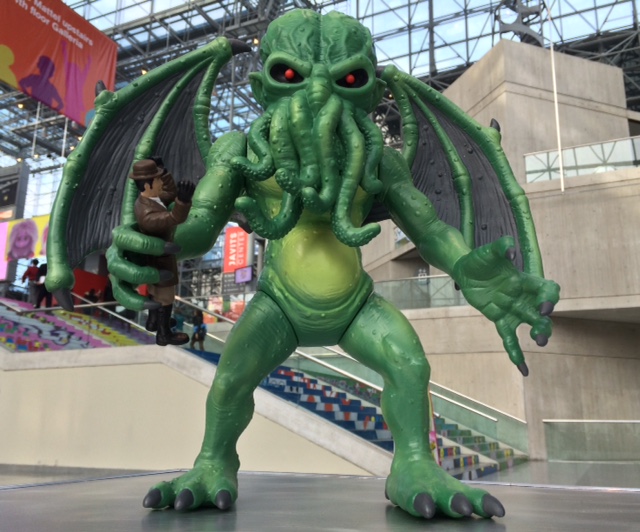