Watch The Avengers Get ‘Hammered’ in Age of Ultron 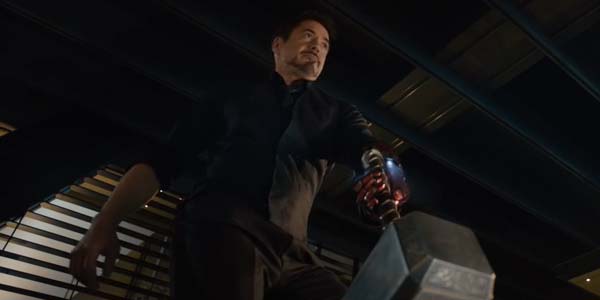 Watch a great scene from Avengers: Age of Ultron!

So this week’s Agents of SHIELD kind of had its thunder stolen… It was supposed to debut the first Avengers: Age of Ultron trailer, but an internet leak meant Marvel released that teaser online days ahead of schedule.  But Marvel is cool enough that they didn’t leave SHIELD hanging, and instead of the trailer we got a small clip from the upcoming movie, featuring our favorite Avengers partying in Tony Stark’s mansion after beating Baron Von Strucker.

The great scene follows Tony, Steve Rogers and more heroes trying to lift Thor’s hammer, like a super heroic party game.  It’s funny and cool, and filled with little character beats– I love that Tony first tries to use his tech before enlisting James Rhodes’ help, to no avail.  And I really love how even though Captain America can’t lift the hammer, he gets it to move a little bit… which deeply unsettles Thor.  There’s a scene in Age of Ultron in which Scarlet Witch shows the Avengers their dark sides, which will mirror this scene.  See, Cap doesn’t have a dark side, and that doesn’t sit right with Tony.

It’s awesome that the best part of this clip is how well this group of likeable characters play off one another.  Seeing the Avengers have some fun actually feels more thrilling than the inevitable crashing of their party by a very, VERY OG Ultron, which then bleeds into a recut of the trailer from last week.

Based on what we now know about Phase Three, there’s some dark things in store for our heroes.  And that knowledge makes seeing them here as friends both a little sad, and very foreboding.  When will things fall apart?  It’s all going to start in Age of Ultron…