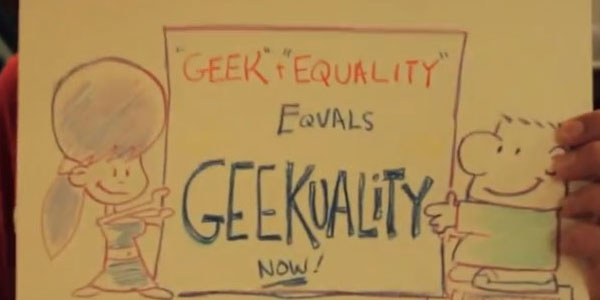 “Geekuality” is the best new word I’ve heard all year.

I’ll never understand the unfounded ire against so-called “fake geek girls.”  Some guys apparently just cannot fathom that a girl would be into the same geeky stuff that they are… and rather than celebrate the fact, they choose to ostracize the girl and accuse her of “faking” her fandom.

It’s stupid, and sexist, and downright mean– the same sort of arrow-minded attitude that geeks have bemoaned being the victim of for decades.  We need to move past this kind of thinking as a society– even in a small niche like geekdom– and while we’re not quite there yet, more and more female nerds have been taking their rightful place at Comic Cons and gaming shops and toy stores across the world.  And we should all be celebrating the fact that cool stuff can be for EVERYBODY!

A band called The Doubleclicks wrote a song about geek girls, called “Nothing To Prove,” and you can check out the awesome video below.  Between the catchy lyrics, real geek women featured telling their stories, and a few cameos from the likes of Mythbusters‘ Adam Savage and Eureka‘s Amy Berg this video is cute and confident, and it makes me proud to be a (tolerant) geek.  Enjoy!