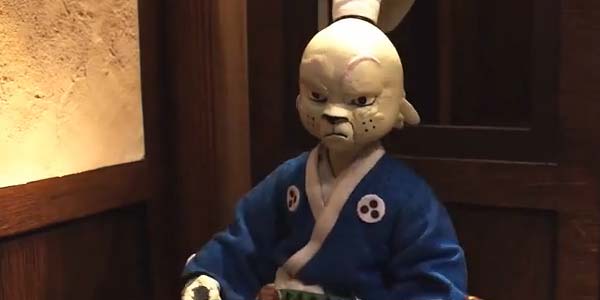 The samurai rabbit stars in this awesome animated clip.

If I had to pick one single comic as my all-time favorite, I would tell you without hesitation it’s Stan Sakai’s Usagi Yojimbo.  The sprawling, two-plus decade epic has always featured the perfect balance of adventure, romance, comedy, and combines it with a thorough and intriguing look at the lifestyles, politics and mythology of feudal Japan, all by self-taught historian Sakai.  Oh, and it features adorable anthropomorphic animals instead of people.

For anyone that has never read Usagi, I implore you to read through the first volume, “The Ronin,” and see if it hooks you the same way it did me.  In the meantime, those early adventures of our wandering ronin rabbit totally inform this stop motion short by Lintika Films.  They have crafted this animated short in association with Roku Toys (makers of this incredible– and incredibly hard to track down– Usagi Yojimbo statue series) as a proof of concept for how they would approach an animated feature film.

The result is pretty good– obviously, the animation is a little rough, but the character designs are spot on and I love the convention of the flashbacks changing to traditional 2D animation.  The overall tone is really good… it’s no wonder after Stan Sakai saw this footage, he gave these guys the feature film rights for his series!

Check out the short below… fingers crossed, this will not be the last time we see Usagi Yojimbo in animated form!