Bring a Smartphone to a Gunfight in Ubisoft’s Watch Dogs 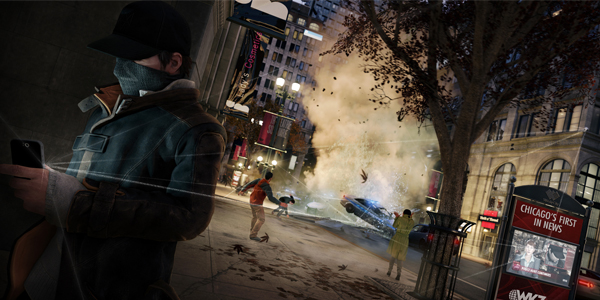 After numerous delays, Watch Dogs has finally landed, bolstered by the hype machine and promising a thoroughly original experience.  While there are often moments of brilliance, however, the game ultimately struggles to live up to the lofty expectations that it set.

Set in Chicago sometime in the near future, we find that the city’s infrastructure is run by an advanced operating system called ctOS.  This of course led to superhackers like protagonist Aiden Pearce, who are able to tap into everything from the Windy City’s gas mains and security systems to soda machines and traffic lights right from their smartphone.  One of the problems right from the onset though is that we never really get to know Aiden or why he possesses his particular skill set.  There is a brief explanation that he was a lead hacker in a botched electronic heist, made some enemies in the process, and his niece ended up in the crossfire.  Now, with his family still in constant danger, Aiden is seeking revenge on those who wronged him and trying to clean up the streets of Chicago in the process.  So what we have is a flimsy motivation for the main character, but no further developments that flesh him out, leaving Aiden about as two dimensional when we meet him as he is by the end of the adventure.  The inclusion of a meter on your HUD which gauges the morality of your actions (repeatedly killing civilians will drop it in a hurry) therefore seems wasted – not only because we don’t really have any connection to the character to begin with, but also because it doesn’t seem to have any effect on the actual gameplay. 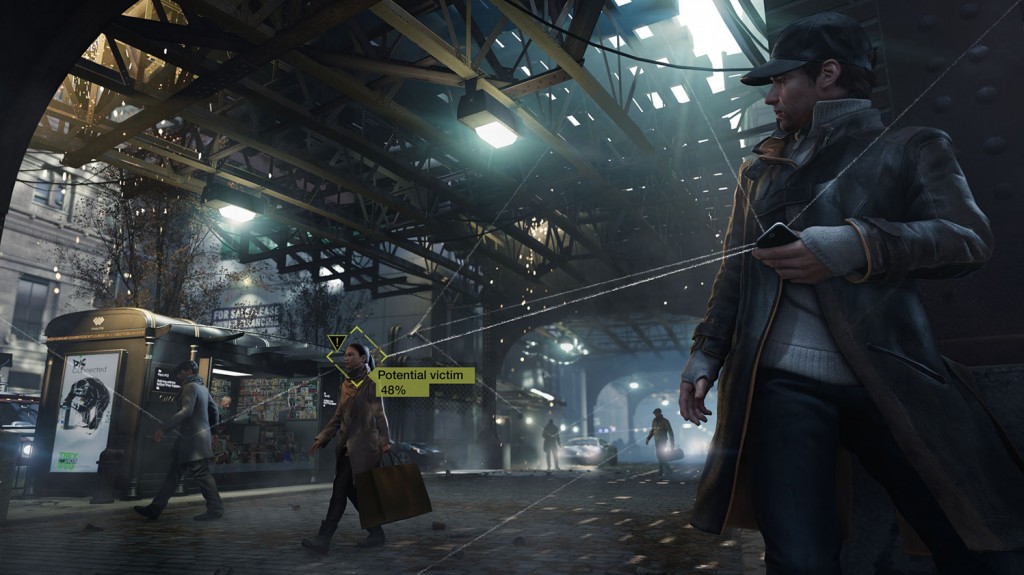 It’s disappointing because the game has been marketed as centering around strategy and deception – keeping a low profile while hacking your environment and remaining unseen in a crowd of spectators.  This model should give way to a deliberately slow-paced, stealthy experience with plenty of time to get into the character’s head, but the majority of the game plays out in raucous shootouts and high-speed car chases.  The hacking mechanic does still set it apart from other sandbox titles like Grand Theft Auto, but it fails to fundamentally change the way the game is played.  That said, it can still be a ton of fun.  During car chase sequences (of which there is no shortage), Aiden is able to use his smartphone to raise divider rods and spike strips to fend off pursuers.  Even a well-timed change of a traffic light can result in a wall of cars blocking off any intersection seconds after you pass it.  It’s satisfying when it works, but takes some practice to pull off effectively as you approach hackable areas at a breakneck speed. 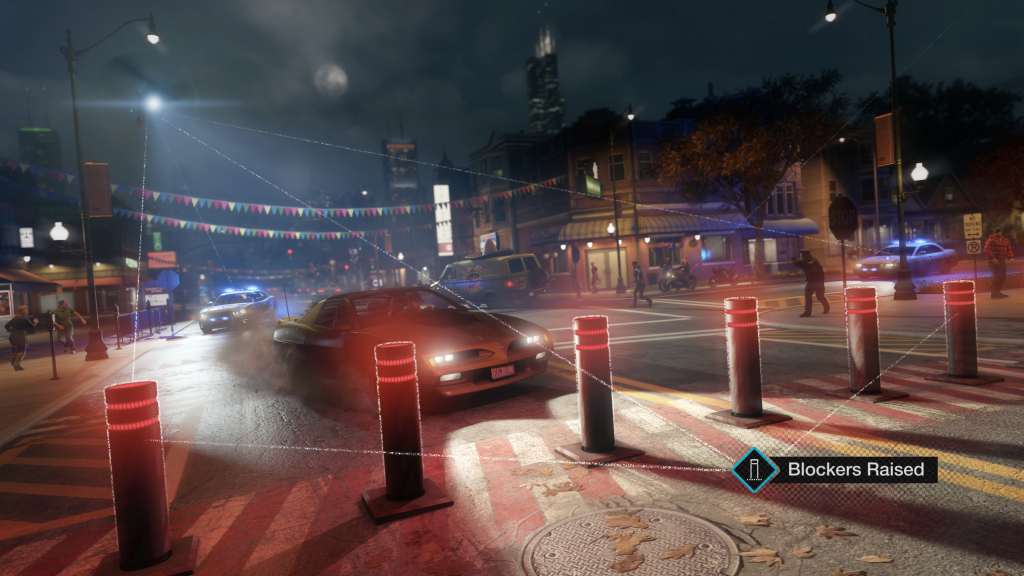 On foot, the game is a bit dicey.  You can try to approach a situation stealthily, throwing objects to make noise and distract guards or blowing up fuse boxes to create a diversion while you slip by.  Inevitably though, someone will spot you, leaving you with two options: pull out an arsenal of guns and shoot everything that moves or reload the entire mission to the beginning and try again.  There are few ways to escape from your foes using the environment once they’re alerted to your presence, so mowing them down with a machine gun tends be effective, albeit a bit out of place in a title where the hero’s main weapons are supposed to be his intelligence and an iPhone.

The story itself is a bit of a mashup of many different assignments, some of which are better than other, and a few that hint to a conspiracy involving the mob.  There’s a bit of an underlying plot that revs up towards the end, but there’s certainly no gripping narrative that propels you through the game.  Perhaps some of the blame falls on the characters themselves.  We’ve been through the fact that the lead is paper thin and completely undeveloped on any level, but unfortunately the sizable supporting cast didn’t fare any better.  There are a few personalities that stood out from the pack, if only for the superior voice work, but none that commanded attention or who were the least bit memorable.  Ubisoft is going to have a hard time making this franchise stick if there are no characters that anyone cares about.  Comparatively, the recently released Wolfenstein: The New Order, a game that revels in its silliness, features some of the best written character interaction I’ve seen in a video game in years.  It’s extremely disheartening that Watch Dogs was so lax in this department. 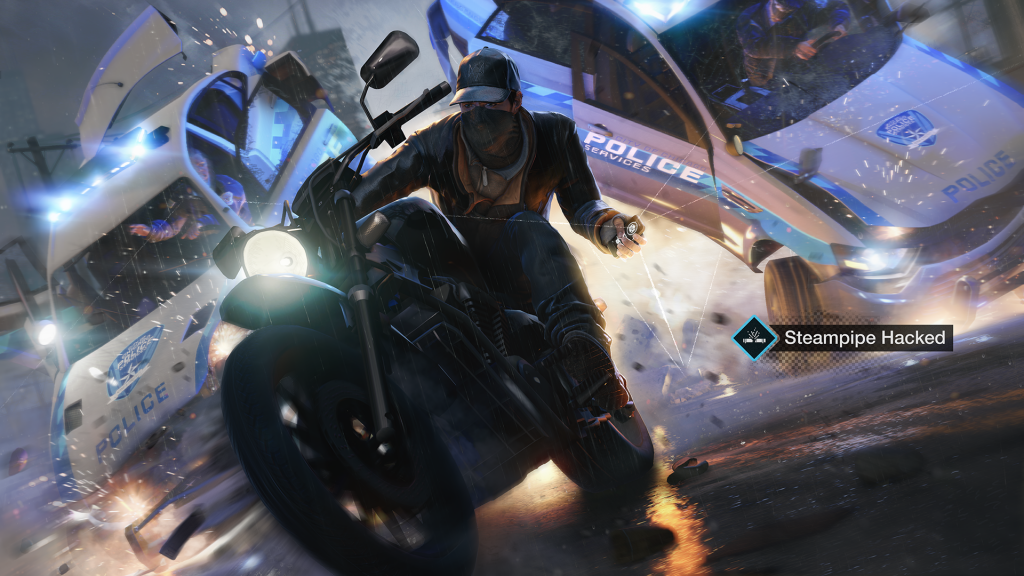 Mechanically though, the game plays very well.  Vehicles handle well, free-running makes traversing the city a breeze, and gunplay is solid.  There is also a staggering amount of game for the money, even after the campaign is long completed.  With over forty different minigames (such as chess and poker), a wealth of side-missions, and an obscene amount of collectibles, completionists will have their hands full here.  Many of the side-missions involve using your hacking skills to find dangerous patterns in someone’s communication and stop crimes before they occur or chasing down a criminal after intercepting notification of their whereabouts.  Visually it’s no slouch either, even if it doesn’t quite measure up to the early footage shown at PAX and E3, but the audio is often rather disjointed from the action. 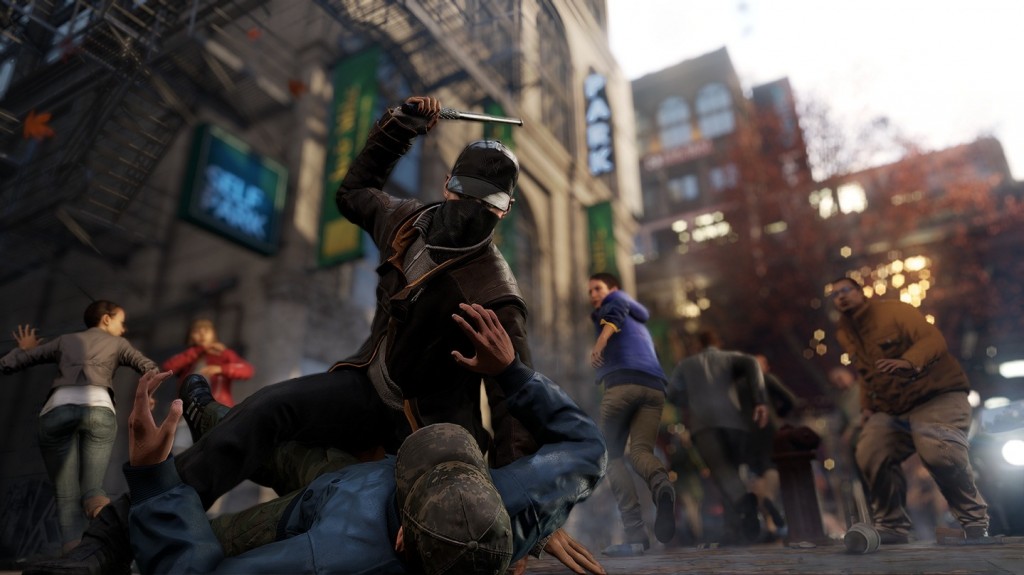 The core concept here is an excellent one, and I wish the developers at Ubisoft Montreal had worked to make Aiden’s anonymity in combat a bit more prevalent while really focusing on what makes him tick and what goes through his head.  He and all the characters are simply too uninteresting to carry the story along and, while the game has a lot of cool ideas, even they wear thin when there’s nothing keep you invested in what’s going on.  If sandbox titles like Grand Theft Auto and Saint’s Row float your boat, you’ll find a lot of familiar territory to like here with a neat hacking mechanic thrown in as a bonus, but it’s just not engaging enough to kickstart the explosive new franchise the publisher was banking on.  Watch Dogs is now available for Xbox One, Xbox 360, Playstation 3, Playstation 4, and PC.