Watch the Latest Guardians of the Galaxy Trailer 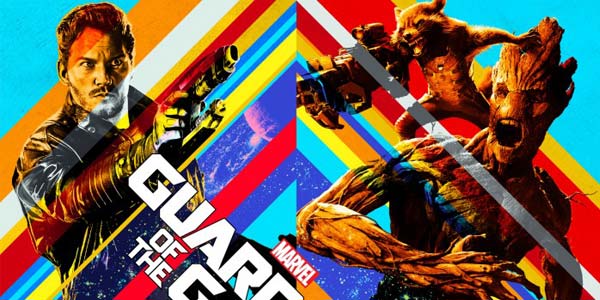 The new trailer for Marvel’s big, bold space opera has lots of new footage to get excited about.

Last night, Disney hosted a Guardians of the Galaxy fan event, featuring a 17-minute presentation from the upcoming film.  It was pretty cool– the first 15 minutes showed off virtually the entire prison break sequence, which has been a big cornerstone of the marketing for the film thus far. I really dug the offbeat energy on display, both in terms of director James Gunn’s solid action beats and the interplay between our characters, who essentially meet for the first time and gel into a makeshift team in their effort to break free from their Nova Corps captors.

There were a few surprises for me– Dave Bautista’s Drax is way, WAY more interesting (and hilarious) than we have seen before now. And Rocket and Groot are perfectly realized CGI characters… I found myself totally invested in this talking raccoon and sentient tree right out of the gate. Based on this early-in-the-story scene, it looks like Chris Pratt will basically play Star Lord as the straight man of the team, although I’d wager that Pratt will still supply plenty of his own brand of screwball comedy in the rest of the film.

After the full scene wound down, the preview switched gears to show off a new trailer, one that focuses almost exclusively on what happens after the prison break– so we see lots of the other characters in the movie like Lee Pace’s Ronan the Accuser, Nebula, The Collector and even a small glimpse of Thanos. It’s an awesome trailer, one that finally suggests the full scale, cosmic scope James Gunn and Marvel are going for in this movie, and I was left totally impressed.

And now, you can be impressed, too! Marvel has released the new trailer from last night online, for your viewing pleasure. Check it out below… August 1st cannot get here fast enough!