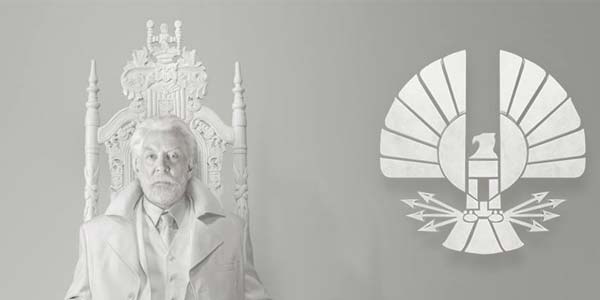 I really, really love The Hunger Games movies.  Like some of the all-time best sci-fi stories, they weave some very sharp social commentary into its rousing drama and action.  These stories actually have something to say, and they say it quite well.  And having a fantastic, strong female protagonist like Katniss Everdeen certainly doesn’t hurt either.

Except maybe it does hurt President Snow, our villain thus far in the series.  Catching Fire closes with Katniss having inadvertently joined a rebellion against the leader of the Capitol.  And the new viral marketing program for the third movie, Mockingjay (Part One, of course) picks up that thread from our villain’s perspective.  Last week we showed you the seven District Heroes of Panem, literal poster children for the Capitol.  Like, seriously, their portraits have such an awesome, old school propaganda vibe, I found them to be more fascinating than any other movie posters in recent memory… and these characters probably don’t even appear in the movie!

And now that tone of information control and propaganda continues in a video which sees Snow address those under his control.  It’s great, and (as a non book reader) I was taken aback when it’s revealed sad-eyed simpleton Peeta Mallark is standing right beside our insidious leader, like a little lapdog.

The video is short but sweet, and it did a great job of drawing me back into the world of Panem, while serving as a stark reminder that what we’ve seen so far in The Hunger Games will almost certainly have severe repercussions in the back half of this series.  Can’t wait!!!