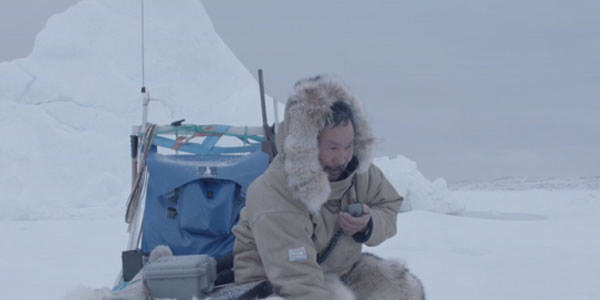 The year’s best sci-fi movie gets an all new short that expands the world of Gravity.

If you have not seen Gravity yet, I don’t think there is anything more me or anyone can do to convince you it’s easily one of the year’s best films.  And now, one of its heaviest and most poignant scenes– as Sandra Bullock’s Dr. Ryan Stone makes contact with Earth, with a man whose language she doesn’t know, and she prepares to die alone in space.

This new short film, Aningaaq, shows us the other side of that conversation, as Aningaaq, an arctic hunter, is in a cold, harsh, isolated environment of his own.  It’s while he prepares to deal with one of his hunting dogs who has fallen ill, that he receives the fateful S-O-S call from Stone isolated in her space capsule.

Aningaaq is totally worth checking out, and I think it adds more depth and another thematic layer to one of Gravity’s most powerful scenes.  And to keep things all in the family, this short was even written and directed by Jonas Cuaron, son of Gravity director Alfonso Cuaron.

Watch the entire short film below… Do you think seeing the other side of the conversation adds to the poignancy of Stone’s near-death confession?