Watch The New Trailer For SPECTRE 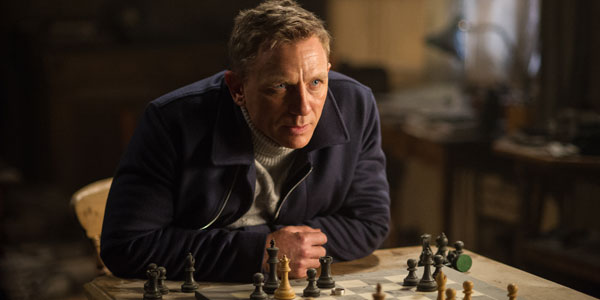 Let’s meet “the author of all James Bond’s pain.”

We’ve seen quite a few glimpses of SPECTRE, the latest James Bond tale, but now we’ve got our first full trailer.  It’s most definitely more Skyfall than Casino Royale— the action is big and the set pieces even bigger… in this two and a half minutes, we see Bond travel to Mexico for a Dia de los Meurtos Festival, the rainy streets on London, a snowy arctic setting and the super creepy lair of SPECTRE… in which we meet Christoph Waltz, playing Franz Oberhauser, leader of the sinister organization.

I have a bad feeling SPECTRE is taking a tone deaf page from Star Trek Into Darkness and its notoriously badly executed “surprise” reveal that Benedict Cumberbatch’s character was actually super villain Khan.  But whether Waltz is really playing a new Blofeld or not, he should make for a great Bond villain.

The trailer also spotlights the new movie’s supporting cast, including what appears to be bigger roles for Naomie Harris’ Moneypenny (yay!) and Ben Whishaw’s Q (double yay!), as well as the new Bond women Monica Bellucci and Léa Seydoux.

I quite like the slow escalation of Daniel Craig’s Bond series.  Casino Royale was amazing, one of the best Bond films of all time, thanks in no small part to its grounded nature and deliberately rough edges.  Quantum of Solace ramped things up, and Skyfall moved us back into the more fantastical nature of vintage Bond.  SPECTRE continues the trend, bringing together the tones of all three previous movies into one (hopefully) comprehensive, HUGE scale Bond adventure.

Check out the trailer below, as well as a new synopsis of the film.  Watch for SPECTRE to emerge from the shadows this November.

A cryptic message from the past sends James Bond on a rogue mission to Mexico City and eventually Rome, where he meets Lucia Sciarra (Monica Bellucci), the beautiful and forbidden widow of an infamous criminal.  Bond infiltrates a secret meeting and uncovers the existence of the sinister organisation known as SPECTRE.

Meanwhile back in London, Max Denbigh (Andrew Scott), the new head of the Centre for National Security, questions Bond’s actions and challenges the relevance of MI6, led by M (Ralph Fiennes). Bond covertly enlists Moneypenny (Naomie Harris) and Q (Ben Whishaw) to help him seek out Madeleine Swann (Léa Seydoux), the daughter of his old nemesis Mr White (Jesper Christensen), who may hold the clue to untangling the web of SPECTRE. As the daughter of an assassin, she understands Bond in a way most others cannot.

As Bond ventures towards the heart of SPECTRE, he learns of a chilling connection between himself and the enemy he seeks, played by Christoph Waltz.