This Week On “The Facepalm Over The Django Toy Controversy” 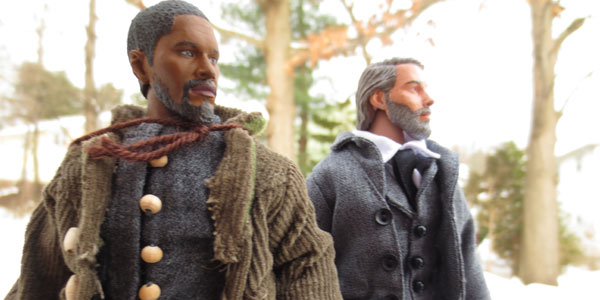 You can’t make this shit up. Well, apparently somebody could.

So last week the Weinstein Co. pulled the plug on NECA’s (still very good, for the record) Django Unchained action figures.  Then, last weekend, prices for the abruptly discontinued toy line just kept skyrocketing on eBay, with no end in sight… auctions for the set of six figures jumped as high as $400 on Friday, and by Sunday Broomhilda alone was fetching nearly $5k.  These movie collectibles based on a stylized look at the cruelties of slavery were now being sold on the auction block for record sums, and it all felt pretty weird and dirty and counter-intuitive.  Life, imitating art, imitating life… or at least, some well-meaning but impossibly misguided, pseudo- Politically Correct talking head version of all that.

But regardless, that chapter has now been closed, also– eBay has decided they’re getting out of the (plastic toy) slave business– by shutting down any and all Django Unchained figure auctions they can find.  While there hasn’t been an official statement, sellers are receiving an email from eBay stating: “Since the manufacturer of this product has discontinued the item’s sale due to its potentially offensive nature, we are not allowing it to be sold on eBay.”

My guess why eBay is doing this? Toys have a relatively low percentage cut that eBay takes, in comparison to other, more typically high-end goods. I would not be surprised to see the auction giants increase the percentage of their take on toy auctions across the board, and then conveniently begin to let more Django auctions slip through their fingers “unnoticed.”  I know I sound a bit like a conspiracy theorist here, but eBay is a pretty terrible company, and if racial insensitivity was really such a hot button issue for them, why aren’t they cracking down on overtly racist categories like these ones compiled by the AV Club?

So screw eBay. And screw all those greedy profiteers capitalizing off this dumb controversy.  The craziest thing is, Django Unchained isn’t some schlocky, podunk movie.  I can’t think of another circumstance in which collectibles based on a nominee for BEST MOVIE OF THE YEAR were met with this much misguided outrage.  And the true shame remains, in that these really are fantastic figures– I doubt anyone buying them now will ever appreciate the wonderful detail and effort NECA clearly put into these guys.