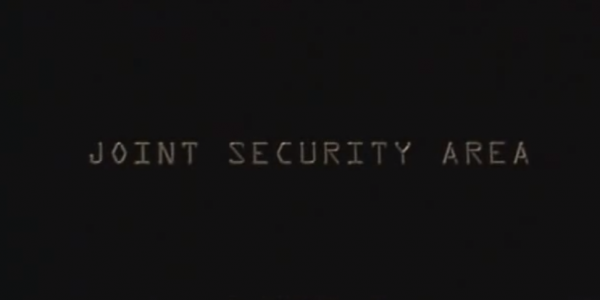 If you enjoyed the extremely personal solution to Murder on the Orient Express’ mystery, you might be impressed by Park Chan-wook’s drama about a murder of Korean soldiers on the DMZ.

Hello, I’m Patrick, and this is the Weekend Download! Each week I’ll be digging up a film or TV show that you might not have heard of, never got a chance to watch, didn’t really give a fair shot to the first time, or something that I find relevant or interesting enough to do an article about. I’ll also be including links where you can buy or rent these films and shows, as well as identifying streaming services where they would be available, to give you a chance to really take a look at these films and shows to draw your own conclusions. I’ll also be delving into my own collection (which I think I stopped expanding back in 2009) to rewatch some of the movies and shows that I loved when I was younger, and see if they still hold up today. So, without further ado, let’s start the Weekend Download!

After watching Murder on the Orient Express, I thought it would be a good time to revisit one of my absolute favorite whodunits (or in this case whydunits.)  JSA, aka Joint Security Area, is the very first Park Chan-wook

film I was exposed to.  JSA tells the story of a fateful night in which a South Korean soldier murdered two North Korean soldiers in cold blood, right on the DMZ between the countries. After the two nations fail to reconcile a joint investigation, the NNSC (Neutral Nations Supervisory Commission) is brought in to get to the bottom of the events that led to the hostile action, and determine the motive before the two nations go to war. Major Sophie Jean (played by young Lady Vengeance herself, Yeong-ae Lee,)a Swiss officer of Korean descent is brought in to spearhead the investigation.

The movie, despite being a product of South Korean cinema, goes to great lengths to try to present the story without bias. The beginning of the film acts as a thesis statement to the movie’s philosophy. The proceedings are meant to encourage the main character, Sophie, to be mindful of the importance of true impartiality but it does feel like the character of Major General Botta is speaking directly to the audience.

“This is a very special case. The perpetrator is already in custody, and we even have his confession. Our job is to find out, not who, but why? Also what’s important is not the outcome, but the procedure.[…………………. ]Your ultimate goal is to remain perfectly neutral and not to provoke either the South or the North. Got it?”

The horrifying philosophy of the North Korean regime is legendary, but the film presents a counterpoint where perceived immorality can dull the humanity in the “righteous” and lead to an equally bloodthirsty mentality from the “morally superior” side of any argument. This movie sits in a fascinating place, from a philosophical standpoint and I could probably do a whole article about it, but in order for philosophy to mean a damn it has to have an equally impressive narrative; so let’s talk about what JSA is, once it’s been broken down.

Primarily, JSA is considered a mystery, though it’s unusual in the sense that the truth lies somewhere between two lies. Most of the story is revealed through flashbacks as the NNSC interrogates the people involved. The setting is right on the DMZ between North and South Korea, so the movie’s themes deal mostly with binary philosophies; North and South, Casual and Professional, Friends and Enemies, Deception and Discovery,

Nation and Person just to name a few. Two official sides of the story are presented. One involving kidnapping and the other involving a cold-blooded ambush. Both of which present the shooter as a ruthless bad-ass. His bad-ass persona is the ultimate asset of either side; the North casting him as a terrorist against North Korean people and values and the South presenting him as a subversive enemy of tyranny. Of course, there is that juxtaposition again between Nation and person, as the character of Lee is presented as being far more sympathetic than either side would care to see him as. This all leads to the movie’s twist and the absolute apex of its achievements. The truth. As the real events of what happened that night are revealed, the characters, as they are shown in the present, are made to seem like shadows compared to who they were before everything went wrong. This brilliance of this character development is how it tracks backward to reveal their arc, instead of presenting events in order. The film gives us a sympathetic look at both sides, but more than that it gives us a clear before and after picture of the tragedy, lending gravity to the devastating effect it has on everyone involved.

Final Word: I’m gonna have to leave it at that if I want to avoid giving away the best parts of the movie for those who haven’t seen it. I would encourage you to check out J.S.A. Joint Security Area if you haven’t. The film is, of course, a Korean language film, so if you can’t stand subtitles…then you are just missing out on some of the world’s best movies, but that’s an argument for another day. Currently, you can watch J.S.A. on either Youtube or Google Play for just $1.99. Honestly, a great price for a movie that reminds us that humanity is not a nation.

Well, I hope you enjoyed this short look at J.S.A. Feel free to leave a comment telling me how you feel about the film, or if you just have an opinion on what I can do to improve this column, or would like to recommend another movie or TV show that I should feature.  Well, that’s gonna do it for this week’s Weekend Download. Until next week, logging off.