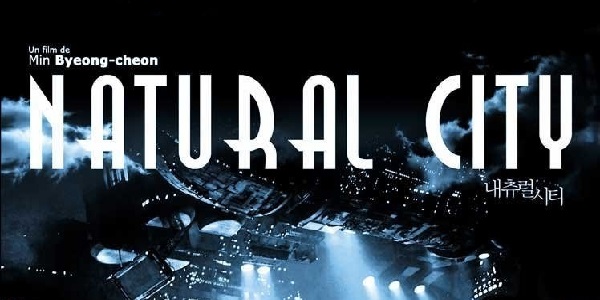 You like Blade Runner? Maybe you’d be interested in a South Korean film inspired by Blade Runner. We’ll be looking at Natural City for this, the very first, Weekend Download.

Hello, I’m Patrick, and this is the Weekend Download! Each week I’ll be digging up a film or TV show that you might not have heard of, never got a chance to watch, didn’t really give a fair shot to the first time, or something that I find relevant or interesting enough to do an article about. I’ll also be including links where you can buy or rent these films and shows, as well as identifying streaming services where they would be available, to give you a chance to really take a look at these films and shows to draw your own conclusions. I’ll also be delving into my own collection (which I think I stopped expanding back in 2009) to rewatch some of the movies and shows that I loved when I was younger, and see if they still hold up today. So, without further ado, let’s start our very first Weekend Download.

This week I’ll be exploring a South Korean movie, Natural City. This 2003 film is a bit of a rarity for a foreign language movie because it’s a fully realized, live-action high-concept science-fiction. The film stars Ji-tae Yu (of Oldboy and Attack the Gas Station fame and yes I will most likely be covering both of those films) as R, an MP (Military Police?) who’s in real love with a robotic woman, a “doll” named Ria played by Rin Seo, Chang Yun as Noma an MP who plays by the rules and also acts as R’s CO and Jae-un Lee as Cyon a street-smart 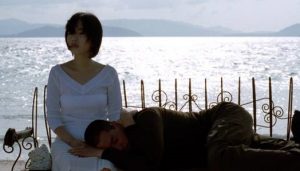 fortuneteller with an unavoidable connection to R. I last watched this movie back in 2007 and I remember enjoying it, but let’s see how eleven more years of experience has changed my perspective.

This one is complicated at first glance but leans pretty heavily on some well-worn cliches. The year is 2080. R is a police officer specifically tasked with hunting “cyborgs,” artificial humans created by super-company NEUCOM to fill specific roles and jobs within society. R falls in love with Ria a cyborg designed for dancing and starts trying to find ways to extend her expiration date. In a fight with some cyborgs, R fails to deliver devastating wounds (in order to harvest the valuable cyborg components) causing three members of his squad to be killed. He is put on suspension by his former friend and CO, Noma, which makes him even more desperate as Ria’s expiration date looms. Meanwhile, he meets a young fortuneteller/prostitute named Cyon who has an inexplicable connection to Ria and might just be the key to saving her life. All the while, a terrorist organization of cyborgs led by a combat unit named Cyper (played by Doo-hong Jung) also has plans for Cyon, but where did Cyper come from and what makes Cyon so important to him? That’s the plot in the nutshell, but this movie is not as straightforward as I’m making it sound.

Natural City has a great opening fight scene but slows down significantly after that. The film is around two hours and most of that time is spent developing relationships between the characters with varying degrees of success. The story strives to remain human in its telling, but R’s general attitude (even without his cold-blooded approach) is incredibly alienating. Ji-tae Yu is an incredible actor and gives a committed performance, but most of the time we’re left to wonder if R loves anyone. He treats Ria terribly most of the time and Cyon like less than dirt pretty much all of the time, and yet we’re still supposed to buy his desperation as a necessity. As a 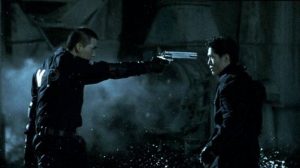 result, most of the movie is just a jumble of confusing portrayals of emotions that just aren’t connecting. In other words, Natural City’s attempts to make me empathize with any of its characters are mostly unsuccessful. R is a jerk, Noma clearly has more faith in R than he should and ends up being kind of an enabler, Ria is actually pretty good most of the time but that’s just because her slowly deteriorating memory rings of true to life Alzheimers development and Cyon is a straight up punching bag. At one point in the story she’s raped, and it’s just kind of played off like “What a day!” The editing doesn’t do the film any favors either as it cuts some scenes too quickly without giving them time to stew before we’re on to the next plot-point. Honestly, the whole thing can be a bit too much at times. Then about forty-five minutes before it ends, it decides to stop messing around and start introducing an external conflict! Hallelujah! There’s even a satisfying wrap-up of the R and Ria storyline. The third act feels like a totally different movie!

Final Word: So why should you watch Natural City? It’s an absolute spectacle of a thing. When I say fully realized I mean it. Seriously this one goes all out to hammer the “IT’S THE FUTURE” thing home. Flying cars (but not motorcycles for some reason,) huge buildings, massive future guns and armor, cyborg ninjas, and ridiculous future tech; I mean this is why people make sci-fi movies! Natural City is a masterpiece of world-building even if it can’t quite sink the emotional hooks in until the third act. I don’t expect everyone to sit through an hour and fifteen minutes of poorly presented romance and conflict just to get to the thoroughly decent sci-fi action and drama at the end, but hardcore fans of cyberpunk staples like Ghost in the Shell, Blade Runner, and the Matrix should definitely give this one a couple hours. By the end, I’d have to say I was satisfied that it was worth my time.

This one is a bit hard to come by though. Of course, you can pick it up on Amazon.com on either DVD (which is what I have) or Blu-Ray, but I haven’t been able to find a copy to stream anywhere. Sorry about that. Well, I still stand by my assessment that hardcore sci-fi buffs should really give this one a try. That’s gonna do it for this week’s Weekend Download. If you have any thoughts be sure to leave them in the comments below. Until next time, logging off.