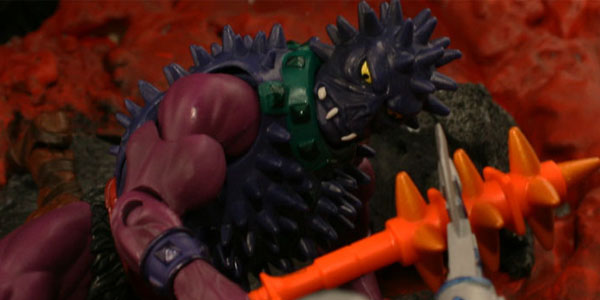 Spikor is a very peripheral character for me. I never owned the original, nor was I even interested in the toy. This made his Classics figure a special surprise for me, given his blank slate status– beneath this spiny purple exterior is an interesting backstory, a unique specialty among the evil warriors, and just the right amount of accessories. Spikor is a toy that really stretched the $20 budget in exactly the right ways. He was not without flaws, however, but the issues he had went beyond this July’s MOTUC addition. 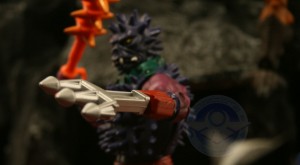 There is a lot of good to be said about Skeletor’s untouchable master of evil combat. He comes fully arrayed with spiky armor, and though the points are smoothed over, the spikes are not as blunt as you’d expect Mattel to make them. I wish they would be sharper for the “Adult Collector” is these instances, but they still have safety standards to uphold. Spikor comes with his signature spiked club, nicely painted in orange metallics., as well as a trident set for his left hand… including everything you could want for an action feature reproduction: there is the trident housing unit, two tridents (extended and retracted) and even a replaceable left hand. This is exactly what Mattel needs to do for every release. After all the obstacles they can’t seem to overcome, it does give us hope that they know what they are doing sometimes. Spikor has the same articulation you can expect from the Classics line, and was fantastic to pose.  If there was anything to be said about missing accessories, many fans would love his hammer attachment, since according to a vintage mini-comic, he is the blacksmith that forges the Terror Claws for Skeletor. A hammer-attachment pack-in would be an amazing touch with they get around to making this inevitable sought-after variant. 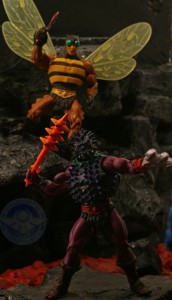 There are some factors working against this figure buyers should be aware of. And by factors, I mean paint issues. I am sure many have seen several posts on this, but his eyeballs leave much to be desired. Of the five Spikors to arrive, three of mine had a lazy right eye, one was looking down, and the last one was OK, but both side teeth had the white paint chipped right off. I have two replacements on the way as I type this. Secondly, he shares in a disturbing new trend with Vykron: painted limbs. In short, you move a joint, the paint chips, and the base plastic appears to be black. Vykron has much more to lose in long-term play and posing than the dark purple Spikor, but painting limbs the correct color should not be allowed. Paint the limbs to enhance detail, but the limbs themselves NEED to be MOLDED the correct color. I hope this won’t continue into the later months… after the debacle of DCUC 16’s Robin, I cannot understand why they would go this route.  Spikor is so far, so good, but I wouldn’t make him a vehicle driver, lest you wish to peel him off a seat someday, and leave behind a purple surprise.

Once you have a well-painted Spikor, however, you will see what an asset he is to the line. Painted weapons, proper accessories faithfully interpreting an old action feature, and a special extra hand to further his value– this is exactly what Mattel should be doing each and every month. Send Stinkor to the corner; even painted limbs couldn’t keep Spikor from being one of the best additions to come to Masters of the Universe in a very long time.