Review: The Wicked + The Divine #1 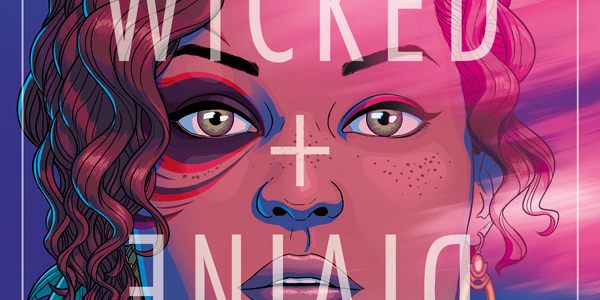 A story about seductive deities, teenagers in wigs, and exploded craniums.

The hauntingly beautiful face on the cover of Image’s new comic The Wicked + The Divine lures you in with it’s use of soft and vivid colors atop a stern female face. Written by Kieron Gillen with art by Jamie McKelvie, the book explores the idea of pop stars as gods, having an ethereal command over their fans. You can’t help but consider the tale’s tagline of “just because you’re immortal, doesn’t mean you’re going to live forever” as a juicy bit of foreshadowing, but it’s still too early to tell.

The story begins at a seance or a weird style of poker where people play with skulls instead of cards. The scene moves on kind of slow, without much dialogue. Then all of a sudden, some magic stuff happens and BOOM the house explodes, without any real explanation. To be honest, that pattern is repeated throughout the rest of the story, and makes for a peak and valley interest in the story.

The book’s main character is the beautiful girl on the cover named Laura. She sports some interesting eye makeup, that admittedly I mistook for a black eye at first glance. The reason for the adornment is in preparation to see her idol perform, a woman called Amaterasu (named after the goddess of the sun and the universe in the Shinto religion). After some more interesting magic and talks of soiled pants, Laura finds herself backstage, talking to a woman that calls herself Luci. Turns out Luci is short for Lucifer, and after some more slow building conversation, the room gets lit up in a hail of gunfire and two heads explode at the snap of a finger. The story finishes in a courtroom with the judge’s head exploding and a revelation that the gods they keep referring to may not actually be gods.

The premise for the story is engaging and mysterious. You spend most of the time figuring out if these people are actually the gods they claim to be, or if their powers are just an act. The art is compelling with a lot of high action shots done on interesting angles. Amaterasu’s eyes, on-stage, was eerie and alluring showing dark eyes surrounded by pastel. The story arc is a bit jerky for my taste. I didn’t like the lack of explanation of who the gunmen were, or why Laura would be playing with a laser pointer when she was meeting her idol. Also, it’s still unclear who the antagonist is, and what the greater point of struggle will be. That being said, if the future volumes are filled with at least half as many gory brain bursts, I will be just as eager to read them.