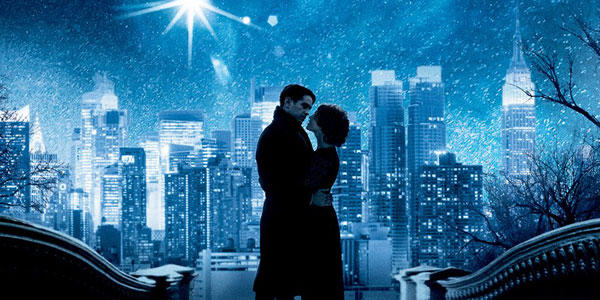 Winter’s Tale is sappy and sloppy and completely, fantastically romantic.

I have a confession– I LOVE romantic fantasy stories.  If I catch even a second of The Princess Bride or Stardust when they’re playing, I’m instantly committed to watching through to the end.  While Winter’s Tale never quite reaches the same heights of perfection as those classics of the genre, it holds its own as a compelling love story.

Based on the 1983 novel by Mark Helprin, Winter’s Tale has been the long-time passion project for Oscar winning writer (and now first time director) Akiva Goldsman.  The majority of our story is set in an alternate, slightly more magical version of 1895 New York, as we follow street thief Peter Lake (Colin Farrell) as he encounters the woman who will change his life forever, Beverly Penn (Jessica Brown Findlay).

I use the word “slightly” quite intentionally here– while the locations and wardrobe and mannerisms of this world are quite authentic, this universe rolls in many fantasy elements as well… angels and demons walking among us, miracles as something of a commodity… and these more unbelievable elements are an everyday part of this world.  The result can be jarring for some viewers, as the script offers very little exposition behind these more magical elements, but I found it a welcome decision.  Explaining such things would bog down the remarkably well-paced story being told, and nothing is so high concept as to require much more than an initial willingness to suspend disbelief.

The first two acts of the film follow the burgeoning romance between the quietly dashing Peter and the vibrant but terminally ill Beverly, who is dying of consumption.  As their love grows, Peter begins to believe that the miracle he can perform will be what it takes to save this red haired girl from a death too young, but standing in his way is Pearly Soames (Russell Crowe), a demonic gangster bent on crushing the miracle and killing his former protege Peter.

Without giving away too much of the plot, Peter’s life is extended to the present day, in which he meets a columnist named Virginia Gamely, who may be the key to finally fulfilling his destiny.  Spanning over a century and featuring so many inter connected characters makes the tale feel appropriately epic, despite the intimacy of the core cast of players, and the strong actors in the leads are very good across the board.

Russell Crowe, with a killer facial scar, twerky facial tic and raspy Irish brogue, brings an intimidating presence to Soames.  Crowe devours the scenery here, giving each of his moments on screen a welcome energy, while making sure his villain feels as if he’s right on the heels of our heroes.  Farrell and Findlay are both wonderful as well, each charming in their own way, which helps to power through the cheesier dialogue they each speak at times.  Their on screen chemistry is undeniable, though, and I instantly fell in love with this couple, becoming fully invested in what happened to both of them.  Even smaller roles like Jennifer Connelly’s Virginia and William Hurt as Beverly’s father get nice moments to shine, while adding even more pedigree to the cast.

With such a sprawling web to weave, it would stand to reason that a first timer behind the camera such as Goldsman wouldn’t quite be able to keep up.  But he does a commendable job, keeping the pace of the story moving forward while also letting the crucial character moments breathe.  The biggest flaw of Winter’s Tale is the script, also by Goldsman, which features some clunky dialogue and a silly, New Age-y mythology about light and stars and past lives.  At times, the lines get so awkward and the philosophy so heavy-handed that even a cast this up to the challenge can’t keep the scales balanced away from cheesy melodrama.

Likewise, suspension of disbelief non withstanding, there’s some questionable effects work on screen, from aggressive lens flares, to a glaringly CGI scene where Peter flies on his Pegasus above the streets of New York.  It’s these few moments, spoken and visual, that push the movie past fantasy into straight-up farcical territory, but thankfully they are few and far between, and most take place late in the film’s run time, when you’re either invested enough to look past them or have already checked out.

I will readily admit, Winter’s Tale is not a movie for everyone.  This is not the type of love story that will melt the heart of a cynic, but I don’t think it wants to– this is very much a movie for romantics, people who are willing to get swept away by the sweetness and magic of love.  It’s a messy movie, rough around the edges but I found its sense fantasy, and the love story being told through its central players, to be perfectly charming and totally engrossing.