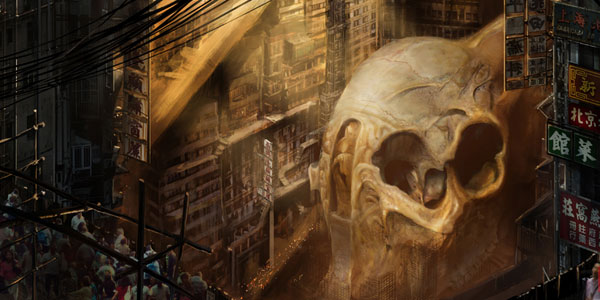 There’s not many things I’m more anxious for than Pacific Rim.  There’s something so simple, yet so purely cool about a mega-scale, big budget Kaiju battle movie, watching enormous robots and unearthly beasts do battle in the cities of the world… so cool!!  And knowing Del Toro, there won’t be much hollow action– the director loves to build universes, planting entire histories into each background and frame of his films, and I expect his Jager vs. Kaiju epic to be no different.

Take the image above, for example– one of a pair of new illustrations by concept artist Doug Williams, the painting appears to be the skull of a fallen Kaiju, retrofitted into some sort of temple amidst the man-made buildings of a city. That’s so cool, and weird, and wonderful!  Whatever the context is behind the choice to live/ worship/ commiserate inside the skull of a city-crushing monster… I want to know– no, I NEED to know, and as soon as possible!  These are the sort of striking, imagination-inciting visuals I was hoping we’d witness in Pacific Rim… and it looks like GDT will deliver.

There’s another concept piece– featuring the massive Russian Jaeger standing guard over his homeland– over at Total Film… Click Here to see both images now!