There Is No Wrong Way To Get Started With Comics 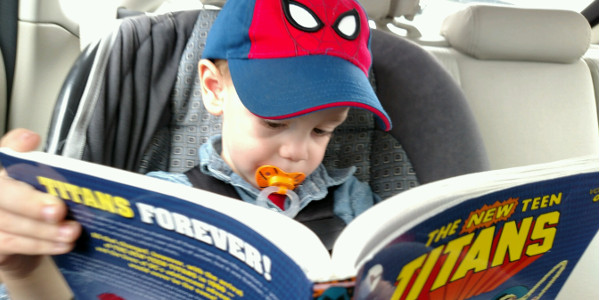 The world of super-heroes is an amazing world and there is no incorrect way to get to know it.

When I received the book, my family was on our way out, so I just grabbed the mail and threw it in the car. My son Sean was curious about the large package, so I opened it. Now Sean is 3, and his father, me, is a comic geek, so he’s been exposed to a lot of super-heroes (Spider-Man being his favorite). And as a responsible parent, my wife and I are selective on what we expose to him. Sean knows that he can’t read daddy’s books, unless I think they’re OK for him to view. This is just parenting. While these are super-heroes, most of the stuff I have is far from kid-friendly One of the shows we allow Sean to watch is Teen Titans Go. It’s goofy and extremely silly, and while Sean doesn’t get all the jokes, he does crack up to it. Personally I’m not a fan of Teen Titans Go, but if the kid likes it, who am I to say no?

So anyhow, when I opened the package, Sean immediately recognized Robin, Cyborg, Beast Boy, Raven, and Starfire. I then explained that the other 2 characters were Wonder Girl and Kid Flash and that New Teen Titans was one of daddy’s favorites book. I then let him to look through the book while we drive. My wife decided to take a picture because he just looked so cute. This is the result: 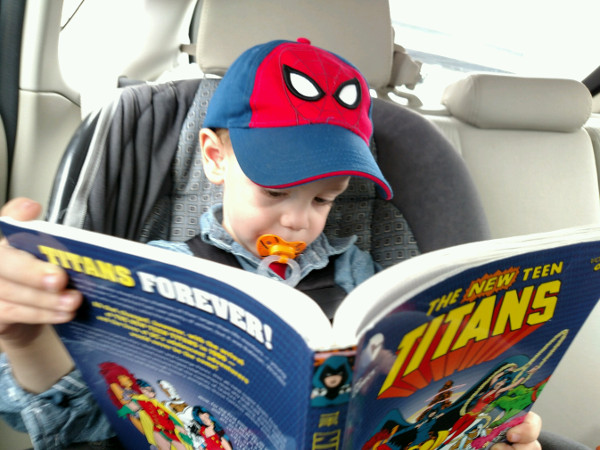 Of course I wanted to share it on Facebook, but I also decide to tag writer Marv Wolfman and artist George Perez. As soon as the picture is posted, the nerd rage begins. People just went off on the fact that Sean watches Teen Titans Go. It was just insane, that is, until series artist George Perez jumped in and said:

I’m so glad that George is the voice of reason here. I could kiss the man for that. After to his post, people apologized and backed off.

My personal opinion is to allow Sean to find his own path. Right now, he loves super-heroes because daddy loves super-heroes. His tastes may change or maybe he want to know more like I did. But at age 3, it’s my wife and I job to protect him from what we think is inappropriate at this age.

Who knows, maybe this will inspire Sean to go into a career in comics.In any case, this is an introduction to an amazing world.