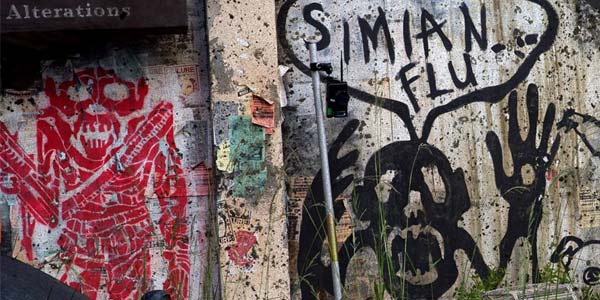 Watch three awesome shorts that bridge the 10-year gap between the most recent Planet of the Apes movies.

Ten years take place from the end of Rise of the Planet of the Apes— when James Franco inadvertently dooms humanity with his Simian Flu– and Dawn of the Planet of the Apes, which hits theaters this week.  And thanks to a cool series of viral shorts, we can now get a better glimpse into what happened in that decade which saw human society crumble into the post-apocalyptic world of Dawn.

Let me just say A) how awesome is it that we get this apocalyptic, fall of society stuff as a viral teaser for this movie, when so many other films would just focus on that for their movie??? and B) while they’re lacking any talking/ horseback riding apes, each short does a great job of adding to the bigger Apes story, without feeling like something absolutely necessary to follow what we’ll see on Friday (you’re so going to see Dawn opening night, don’t even pretend you’re not).

There is a very distinct tone to each video, which makes sense considering each takes place at a different time period.  The first picks up a year after the outbreak, the second five years, and the third (and most powerful) spans time all the way up to Dawn‘s present day.  They’re totally worth a watch, so check out all three shorts below and immerse yourself deeper into the Planet of the Apes!