World War Z Is Not The Book, But It’s Not Terrible 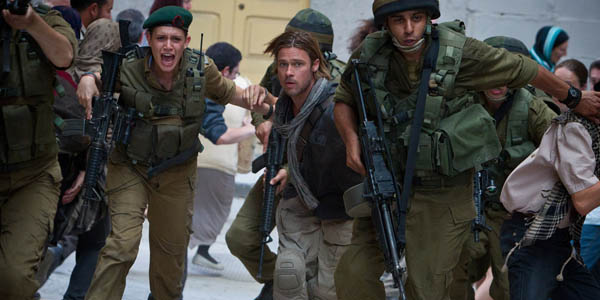 Equally thrilling and terrible, bold and bad… the biggest zombie movie of all time delivers on suspense and action, but falls flat on pretty much everything else.

There’s lots of good movies, and lots of bad movies… as well as completely mediocre ones that lie right in between. But then there’s movies like World War Z, that somehow manage to be both great and awful at the same time. It’s a different beast than a mediocre movie, because with all its well-crafted thrills and massive global scale, World War Z is certainly not average.

To say this movie is based on Max Brooks’ novel of the same name is only true in the most technical terms. The film World War Z employs the same global scope as the book, but that’s really where the similarities end. For some diehards, that difference is enough to stay away, but while it may be very, very different, the movie is absolutely worth seeing, and deserves to be judged on its own merits and flaws.

And it certainly has plenty of both– World War Z covers the dawn of the zombie outbreak, following former (nee-reinstated) UN Investigator Jerry Lane as he searches for clues into what caused this pandemic, and how it can possibly be cured before it wipes out all life on Earth. It’s a simple setup, and Brad Pitt’s Lane makes a solid protagonist for the globe trekking mission at hand. His travels encapsulate the majority of the story, which plays out in a series of episodes from he and his family’s initial escape from Philadelphia, to a Special Forces outpost in South Korea, the nation-fortress that Jerusalem has become and finally a research lab in Cardiff. Along the way, he meets a litany of minor characters, each with their own story to tell about this apparent end of days, although these perspectives are mostly presented as connective tissue between zombie attacks, not the core of the story as they were in the book.

Pitt is mostly fun to watch, especially in the film’s multiple action sequences– rather than relying on the pensive survival existentialism of the novel, Gerry is more like the Jack Bauer of the zombie outbreak. He gets moments to be a badass of the highest order, and his DIY zombie defense, whether it’s duct taping magazines to his forearms and shins to guard against bites, or neutralizing a zombie infection from spreading to one of his allies by lopping off her hand with no hesitation. Lane is smart, fearless and incredibly capable, and his background as a highly skilled embedded agent lends those talents some suspension of disbelief, even in these apocalyptic circumstances.

There is definitely is a lot more action in World War Z the movie than the book, and it’s a good thing. Director Marc Forster brings a great sense of rhythym to the action beats, and he’s very good at ramping up the tension. Each major sequence– from the initial escape from Philly, to the fall of Jerusalem, to the makeshift siege on the labs at the World Health Organization– are absolute edge-of-your-seat thrills. The sense of danger is ever-present, so rather than rely on cheap jump scares, the action often employs a general sense of dread, along with shock and awe over how fast these zombies can completely devastate a human civilization.

I despise fast zombies, but I will say that the speed of the zombies in World War Z is, for me, the first time this attribute has been a benefit to the creatures. They are impossibly fast, and can swarm to such an uncanny degree in mere seconds that every scene is dripping with the possibility that it will be interrupted by more chaos on an impossible magnitude. Unfortunately, the speed of the zombies is about their only great feature. The dessicated, bloodless design of the undead– planned to maintain the movie’s coveted PG-13 rating– makes them seem more like mummies than zombies, and some of the character actors definitely go overboard with the creepy sounds the zombies utter. Quiet moments with a single, supposedly fearsome zombie that spells certain doom for an unarmed survivor brought on more laughs than white knuckles in the theater, thanks to his over the top dinosaur growls. As for the larger scale zombie scenes, the CGI effects have been cleaned up past the dreadful early trailers, but the final effect still feels unnatural in a more disassociative, artificial sense than scarily inhuman– it’s always obvious these hordes of monsters are, very clearly, made of pixels instead of decayed flesh.

When the hero, the scope and the pacing and suspense of the action are this good, it’s hard not to give the movie a pass… because all these things are very good. But the overall film is dragged down by just as many huge flaws, which go past the sloppiness of the digital zombies. The most damaging is Gerry’s family. The wonderful Mireille Enos is utterly wasted in the most thankless role of the year– Karen Lane get nothing to do other than wait by the phone for her husband’s daily “I’m okay” call, and she willingly leaves the safety of the UN’s aircraft carrier refuge with her children when that call doesn’t come one day. The concept here is that Gerry retired to be a family man, and the only way he will go back into the field is in exchange for his family’s safe keeping on board the carrier. Not only is Karen borderline-offensively helpless, offering nothing more than a prize for Gerry to strive toward, the use of her and his children as a liability detracts from Gerry’s motivation as a hero. The novel’s protagonist was driven by genuine motivation to help and understand, not his family effectively being held for ransom by his employers. This motivation does nothing but cheapen Gerry as a character– all signs suggest he is the guy who would step up and volunteer to help however he can in the face of a catastrophe like this, not have to be strong armed into it. Even the payoff of the family in jeopardy winds up contrived and ignored, feeling completely tacked on.

A PG-13 zombie movie always seemed like a questionable idea, and while the film doesn’t skimp on suspense, it does lack any sense of visceral terror. There’s so many scenes which hold back, cropping violence against humans and zombies alike just out of frame, that the result is quite frustrating. Even ignoring my natural gorehound tendencies, the structure of these violent moments feels so staged– to make sure the headshot or severed limb is just off frame– it’s hard to not get pulled out of the action. I understand that violence and gore are not for everyone, but in the age when a basic cable TV show like The Walking Dead can get away with so much, the drastic level to which World War Z holds back and skimps on this crucial element of zombie lore robs the story of much of its tension and virtually all of its horror.

More than anything, though, what does work for World War Z is the movie’s sense of cautious optimism. Too many zombie stories, especially modern ones, focus on a bleak sense of hopelessness, a nihilism that makes you wonder why you’re even care what happens next. The best moments of World War Z show the goodness of humanity at large, that we’re a species worth saving. Even amidst the most horrific and chaotic of times, individuals will risk or sacrifice their lives to help others. There’s a subtle thrill that comes from a movie showing background characters helping one another almost as often as trampling each other in panic. It’s a refreshing change from the faceless, impersonal carnage of many modern blockbusters, to say nothing of the fearful, “with us or against us” survivalist attitude that pervades zombie stories like Walking Dead.

Not everything worked in World War Z, and what didn’t work was jarringly frustrating to sit through. But when the movie gets things right, it gets them VERY right. This film contained some of the most intense thrills I have witnessed all summer, and a bold sense of globe trotting scope which is lacking in many of the most gigantic of blockbusters. Being a huge fan of the novel, it was hard to not walk into this movie with my mind already made up, but I’m glad I managed to do so– World War Z is definitely not the novel upon which it was based… but there’s enough great things going on here to make it well worth a watch.