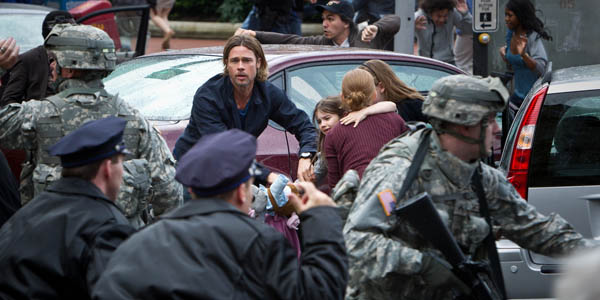 Max Brooks had a great idea.  Coming off the success of his delightfully funny Zombie Survival Guide, he decided to write World War Z, a collection of stories compiled by a journeyman protagonist, recollecting on the previous decade’s worth of battles as humanity attempted to prevent, then survive and ultimately overcome the zombie apocalypse.  It was a smart book, with plenty of interesting vignettes, and painted a wonderfully global, multi-cultural feel, as all corners of the Earth were impacted by this epidemic and responded in wildly different methods… the novel felt as though it really earned the “World” in the title. It was a solid read.  And not one that could easily be adapted into a movie.

Rather than try, it looks like Paramount went the other way, opting to just make a completely other movie and tacking on the book’s familiar title. Gone are the scary, slow-moving zombies, replaced by inhumanly agile and fast, CGI creatures built on the same late 90’s effects work we saw in the Star Wars prequels.  The narrator has been replaced as our protagonist by hunky Brad Pitt, who is, apparently, the only man who can save humanity.  Also gone, evidently, is the global feel and multitude of stories featured in the novel– I can’t even recognize what’s going on here as stemming from any one of the book’s multiple tales, let alone a collection of all of them.  It’s a discrepancy between source material and adaptation that almost feels like a Critic parody more than reality.

This is very disappointing, especially since aside from the great source material, I usually expect better from the likes of Pitt and his co-star Mireille Enos– they’re no slouches, but this really seems like slumming it.  There’s no sense of faithfulness to the novel, no real sense of danger against the fuzzy effects work, and no sense of the scope that was the entire point of this story.  It’s suddenly making a lot more sense why Paramount shoved this one back to 2013…

What do you think? Am I being too harsh on this one?  If so, what works for you in this trailer?