The World’s End Trailer Is Here 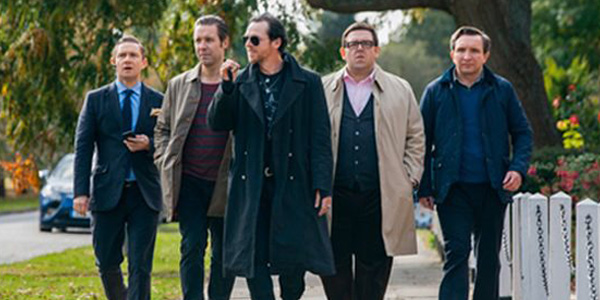 The first trailer for The World’s End has arrived, and it is great.

There’s few movies I’m more eagerly anticipating than Edgar Wright’s The World’s End. This first trailer has done nothing to cool my excitement for the movie. Thanks to this trailer and the delightful teaser poster released earlier this week, we’re starting to get a clearer idea of what this movie will be about, and I love it– the trailer is packed with some fun throwbacks to the previous “Blood and Ice Cream” movies, and even the zombie-esque blue eyed aliens and the quaint British town in which the shit goes down totally harken back to Shaun of the Dead and Hot Fuzz.

I think I’m most intrigued to see Nick Frost play the straight man this time.  Yeah, his Mike from Spaced was the closest thing to a square on that show, but he was still a waaayyy bigger oddball than he seems here.  I feel like now is the right time to go dark on this movie.  The trailer gave me just enough of an impression on what to expect, and Wright’s awesomeness is sure to subvert those expectations masterfully.  So for fear of not spoiling a single, glorious second of this movie, I’ll probably begin ignoring it actively until August rolls around.

And I mean that in the nicest way possible.