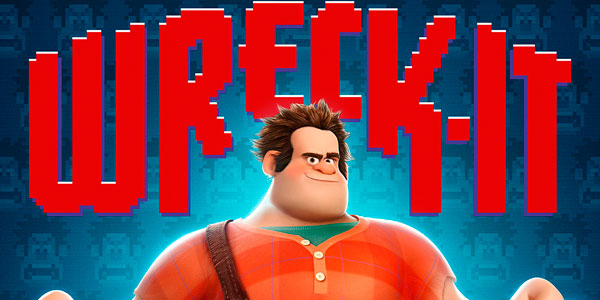 Disney’s video game movie gets into the viral business, offering trailers– and playable online games– for the games of their main characters.

Wreck-It Ralph continues to impress each time Disney pulls back the curtain a little more.  The trailers and posters so far have been packed with a Pixar-level wit and warmth, the voice cast is absolutely stellar, and from what I can gather so far the video game cameos– from Mario’s arch foe Bowser to several Street Fighters– stay on the realm of genuinely cool gamer nods, instead of Family Guy-style elbow-nudging.

With the movie coming soon, Disney is cranking their marketing machine into full swing, and the latest offering is a cool viral feature– trailers for the three original games featured in the movie.  We get short trailers for Fix-It Felix, Sugar Rush Speedway and Hero’s Duty, the games in which the film’s core cast reside, each modeled around the framework of an ad for Litwak’s Arcade, the movie’s location of the varied game consoles.

I love that all three games are very much a product of their times– the ’82 era for Fix-It Felix is totally accurate to the post-Donkey Kong glut at actual arcades from the mid-80’s, and likewise the cutesy racing vibe of Sugar Rush is an excellent throwback to Mario Kart and its many successors from the late 90’s.  The more modern game, Hero’s Duty has a definite Halo/ Mass Effect vibe which is very well done… although the internet nerd in me is already itching to find out why the movie would plant Hero’s Duty in an arcade, when it is clearly based on modern console games.  I’m fighting the urge to bring this up, and I think i just lost.

In any event, the trailers are very well done, almost as cool as last year’s Muppets movie spoofs, and what gives the Wreck-It Ralph promotions an edge is the release of playable versions of all three games at Disney.com!  I have all three trailers below, along with links to the playables, which are pretty darn neat if you ask me.

Wreck-It Ralph hits theaters November 2nd.  That’s getting so close, I’m almost looking forward to Halloween being over this year.