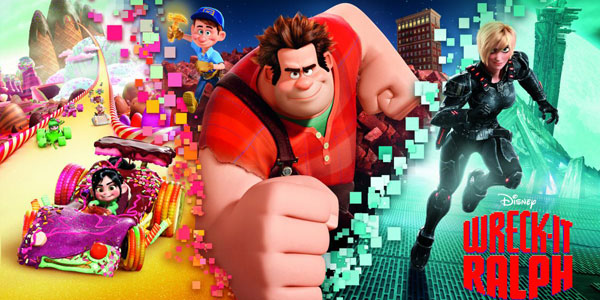 Disney’s video game movie is a cute, smart homage to the button-mashing, joystick-throttling games of yore that offers a fun story and a perfectly-realized pixel based world.

Wreck-It Ralph was one of the best times I’ve had in a movie theater this year.  Thanks to the Disney marketing machine, you probably know the story by now– 8-bit video game villain Wreck-It Ralph is tired of feeling unappreciated by his hero, Fix-It Felix, Jr. and the residents of the building Ralph must destroy in his game.  So the bad guy sets out to prove he’s not so bad, by winning a medal in Hero’s Duty, the new first person shooter that also resides in his arcade home.  There’s really not much more to the story of this film, which clips along at a light, breezy pace through several twists and turns.  Ralph goes on a fairly standard hero’s journey, as he wins his medal in the terrifying combat world of Hero’s Duty, only to lose it when he crash lands in Sugar Rush, a bright and bubbly candy-themed racing game in which he meets Vanellope von Schweetz, and builds a friendship with her that fills the hole in his life.  The plot is standard fare, rarely breaking much new ground, but that’s not really the point of Wreck-It Ralph… the simplicity of the plot leaves lots of space to show off the wildly imaginative and perfectly realized “behind the scenes” world of arcade games, and offers plenty of insight into the characters of Ralph and his co-stars, Vanellope, Felix and Calhoun from Hero’s Duty.

There’s a lot of great character work going on in Wreck-It Ralph, as each of the characters is a perfect blend of spot-on game archetypes, great visual designs and actual humanity, through the clever filter of their programming.  The movie shares a few concepts with Toy Story, with its focus on the secret lives of video games when the arcade locks up for the night, but Wreck-It Ralph makes some great choices that make sure it stays its own movie.  I love the self-awareness of the game characters to their situation and their programming– everyone involved is fully cognizant that they are creations coded into their respective games, and this both plays into the movie’s plot (Vanellope is a “glitch” in her game, phasing in and out of existence at random), and with some clever lines of dialogue (Calhoun’s gruff demeanor is explained as her having the saddest backstory programmed into her).  There’s no Buzz Lightyear sense of mistaken identity going on here, and Ralph’s existential crisis is much more meta.

Ralph himself really is a decent guy, although he stays refreshingly rough around the edges from start to finish.  John C. Reilly brings a real sense of empathy for the brutish character, and he’s a very identifiable protagonist, despite his unchecked temper, and tendency to destroy things around him.  The supporting cast is similarly well-rounded, especially Vanellope, who aspires to be a real racer in her game, something her catty fellow characters and domineering ruler King Candy don’t want to see happen.  Sarah Silverman does wonders with the charming yet obnoxious little girl, and I can’t think of a more perfect voice for a denizen of a mid-90’s racer like Sugar Rush.  Jack McBrayer and Jane Lynch aren’t given as much to do in their great supporting roles, but they both balance the fine edge of remaining strong support while never edging into anything close to villain territory.  The two actors, and their characters, have a fun romantic subplot that feels remarkably organic, and pays off well throughout the course of the story.

The characters are great and incredibly well thought-out, but what really launches Ralph into a whole new stratosphere is the incredibly detailed, well-though out world of these characters.  The movie posits that an arcade is not unlike a city, with each arcade game being a block in the same community.  Characters can travel between games in their off time, via a subway system based in the game consoles’ power cords, and a surge protector becomes “Game Central,” a changing station that leads between the various consoles within Litwak’s Arcade.  It’s a very cool concept, and lends itself incredibly to the major talking point of the movie– the cameos by actual, licensed game characters.  Like Who Framed Roger Rabbit, these legit characters are featured in small, clever scenes that help legitimize our leads, while never overstaying their welcome or getting in the way of the plot or main characters’ development.  Most of the appearances by the game icons have already been featured in the various clips and trailers promoting the movie, but they all work wonderfully in context, from Ralph’s bad guy support group, to poor, homeless Q*Bert whose game was malfunctioning and was removed from the arcade, leaving him stuck hanging out in Game Central.  There’s a ton of small cameos within the changing station, and each one brought a smile to my face as I recognized them from the games I grew up with; I have a strong feeling (based on  the credits list) that repeat viewing of the movie will bring out even more cool references and cameos I missed the first time through.

The final thing that should be mentioned is the incredible design of Wreck-It Ralph.  The movie is lush, colorful and gorgeous to look at, with an amazing array of designs that are very unique and yet all feel organically connected in this shared game universe. Character appearances and tics are all quite clever, from the hoppy, jerky movements of older 8-bit characters like the Niceville residents and Tapper to the amusing bits where Calhoun’s Hero’s Duty soldiers run into a wall and just keep running.  The most well-realized world is Sugar Rush, where most of the story takes place, and the brightly colored, candy-coated world is full of all kinds of fun visual details, soundtracked in JPop-py glory by AKB48’s infectiously catchy theme song.  The kart race that serves as the finale of the plot is crafted well, with a high-speed sensibility that keeps the action moving competently, if not quite as viscerally thrilling as other animated races, like Dash’s escape in Brad Bird’s The Incredibles.

Overall, Wreck-It Ralph is a big win, thoroughly entertaining from start to finish, and filled with great characters and an excellent awareness of the nostalgia on screen.  At first I wondered who, exactly the movie was made for, as I don’t know how many kids these days are familiar with the diminishing presence of arcades today.  But I quickly realized– this feels like the first Disney movie targeting someone my age as the parent, instead of my parents’ generation.  The bright colors, adorable character designs and fun story are for the kids, but the authentic video game nostalgia feels like it’s just for us.