What’s Wrong With the Jem Movie & How To Fix It 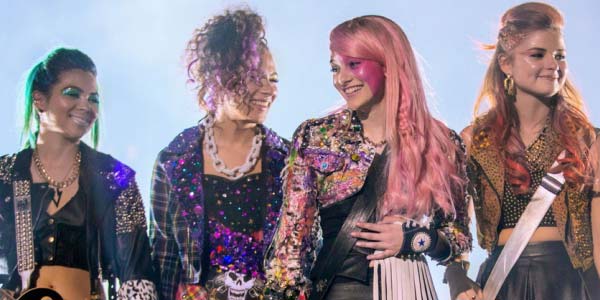 The backlash against the new Jem and the Holograms trailer is pretty much unanimous. If you took the time to stomach it and are a fan of the 80’s series, you’ll realize there are a lot of things wrong with the movie.

Understandably, we don’t see everything the movie has to offer. These actresses I am sure did a great job, and I hope this doesn’t hurt their careers. Being front and center on this production, they stand to be lightning rods for public ridicule fueled by nostalgia, and I personally hope the critics save the blame for Jon Chu and Scooter Braun. Based on what I’ve seen, however, the translation based on the original material borders on Super Mario Bros-levels.  This trailer is particularly offensive in its pitch. More to the point, the original story could have translated better to a modern audience than most movies could hope for.

The trailer basically showed us, as others have pointed out, that Jerrica is a shy teen who catapults to internet fame with her sister Kimber and cousins Aja and Shana. As most lead vocalists are, they become the face of the group. The band turns to brand when Erica Raymond woos Jem — Jerrica’s stage name it appears—away front the group as a solo act, causing friction. After a heart to heart with Rio, she does some soul searching, and reunites the band for the big finale. The trailer just showed us the movie. There are twists and turns I am sure, but that’s it in a nutshell. They just saved me $10.

The actresses in the trailer did a very capable job. Mrs. Bailey from Starlight Music is now Jerrica’s and Kimber’s aunt Bailey (Molly Ringwald), Shana and Aja are now adopted cousins of the sisters, and Eric Raymond has become Erica Raymond. Here, mere glimpses of what Jem is could be found. The changes weren’t so egregious at first. But then the movie gets jettisoned into a more very now, very dated, and very tired scenario. Scooter Braun, Justin Beiber’s infamous founder and clinger-on, used the Jem project to give us Never Say Never 2: But It’s a Girl Band. And like Justin Beiber’s life decisions, he never fails to disappoint. Already, this movie is guilty by association, and is in danger of being as disposable as Scooter’s other acts.

Ignoring the obvious story changes, the trailer gave fans (even casual ones) pause about the treatment of the property. The conceit of Jem is the music they create. They are musicians, and their unique tracks were a part of the series’ success. Composers like Anne Bryant put legitimate energy into making Jem’s 80’s music both artistic and digestible. MTV –that’s Music Television, kids–was in its heyday, which contributed to the visual representation of the music videos. You’d think they would have an awesome punk/rock/pop/alternative/whatever fun girl-powered soundtrack for the movie. I want fun catchy music. And maybe they will give us that, but you would never know by watching the trailer. Towards the end, it was somehow decided to play “Story of My Life” by One Direction. I am not deriding the boy band here when I state this, and it’s clear what shrieking demographic they were attempting to appeal to with this move, but the ONLY music that has any place in this movie (trailer or otherwise) are from Jem and the Holograms, the Misfits, and maybe the Limp Lizards. Jerrica is creative and talented enough for worldwide stardom, but whoever handled the music couldn’t pen a heartfelt ballad about wanting back what she threw away for the trailer? Way to promote the music, fellas.

The other issue I have is the screenwriter ignoring the story gold that was there already and VERY relevant. Watch as I put down an idea for the Jem movie:

We are in a social media culture where folks want information and private details with gluttonous immediacy. Jerrica’s father owned Starlight Music. This paid for the Starlight Foundation: an orphanage, rec center, and creative arts house. Running the house is lead designer Shana Elmsford, Music Director and Head of Operations Jerrica Benton, and Recreational Director Aja Leith. After their father’s sudden passing, hardworking opportunist and company man Eric Raymond (who pursued Jerrica but boy-crazy Kimber crushed on) would prey on Jerrica and Kimber, the naïve inheritors of a huge company. Needing the next huge act, and using the girls’ relative inexperience and blind trust in him, Eric manufactures the Misfits as the next big thing in music, but their edgy style and well-documented public indecency (think Justin Bieber) doesn’t sit well with the family-friendly investors in the company and the Starlight Foundation. He also works a network executive to create a rock band reality competition, a dummy platform to showcase his new band. Voting is done via social media, but of course the program (everything from the judges to the other acts on the show) is rigged to influence voting for the Misfits.

Being a product of their environment, being young and rich daughters of a music titan make Jerrica and Kimber media darlings. While Jerrica became isolated and devoted her time to her father’s philanthropic pursuits (like the Starlight House/Foundation with Aja, Shana, and Rio), Kimber gets wrapped up in the attention and endless material of tabloid fodder, wearing Shana’s cutting-edge fashions wherever she goes. Her endless dates with teen idols and daring fashion choices are constant front page news, mimicked by her fans on social media, but derided by others, notably tomboy Aja.  Another spoiled rotten rich girl in their social circle is later revealed to be the lead singer of the Misfits: Phyllis Gabor, who only goes by the stage name Pizzazz.  A girl who is talented but always pays to get her way, Pizzazz would have reasonable motive to steal the spotlight from Jerrica and Kimber, both on and off the stage. Constantly being upstaged in public by Kimber, and vilified when compared to Jerrica in the tabloids, this would create added incentive to beat them publicly. Her only friends are an illiterate runaway who hangs around for the free ride and the crazy times (Roxanne/Roxy) and a sweet yet impressionable girl with low self-esteem (Mary/Stormer) who always takes direction from Pizzazz.

Losing investors from the Misfits’ antics, and unable to oust the shrewd Eric Raymond, the girls worry about losing what their father has built. They don’t have the clout to find a band good enough to beat the Misfits on their show, which is a ratings juggernaut at this point. They play well together, but they don’t have the resources and visual edge that the Misfits have, especially with Eric Raymond placed in charge of their finances. While going over the father’s will to find any funds or investment not tied to the company, the last part (something the father knew only the girls would understand) catches Aja’s eye. Aja could realize the last part of the will hinted at a special surprise for the girls, where they stumble upon Synergy: a complex and highly-sophisticated audio/visual entertainment system. This includes a hologram of Jerrica’s mother that acts as a “Siri” of sorts, but more sophisticated and intelligent, at times humorous (just like her mother would be). There is also state-of-the-art band equipment and a vintage Roadster squirreled away. All of this was meant for the girls to have private happy moments together after his passing, knowing how the media hounds them relentlessly. Finding quality time alone is difficult and trying out what they were bequeathed, the signature Jemstar earrings turn them into the flashy band they need to be and realize they have what it takes to beat the Misfits. While these resources were meant to be used privately just for them or to be saved for an emergency, they mutually decide to use these gifts publicly to save the Starlight Foundation and re-capture financial control of Starlight Music from Eric Raymond.

There are so many other good ideas completely ignored, as relevant and popular as they are this very moment. The TV series Empire is a huge success at Fox, and warring music execs fighting for control would inject the movie with some good drama. Eric Raymond losing the company and backhanding the young Jerrica in anger would pack a punch even today (and I don’t mean the punch Rio lays on Eric for hitting Jerrica). In addition, you’d think in an era of seeing holograms of dead musicians on stage, the idea would have been a shoo-in for Jem’s stage act. When Tupac was a hologram, comparisons to Jem were made immediately. Lastly, the most important part of Jem’s mystique is that no one knows she is really Jerrica Benton. If they had cast separate roles for Jem and Jerrica, it would have been a smarter move. Imagine living in the age of the internet, and the musical voice of a generation explodes onto the scene, and not one person knows a thing about her. There is no background, and no one can verify her identity, even her band mates. As far as they knew, she’s another orphan who came to the Starlight Foundation to sing. The band’s bond as sisters is strong. She is asked directly by influential interviews like Lindsey Pierce but plays coy, only adding to Jem’s allure. Who couldn’t see a sequel where Eric would pit the media-hungry Kimber against her reluctant superstar sister Jerrica once Jem took center stage in the media, threatening to destroy all they have built? Meanwhile as Jem, she start to act herself around Rio unconsciously, which draws Rio to Jem. Will Jerrica inadvertently embrace her more open persona, and will Rio cheat on Jerrica with… herself?

What we’ve been given is nothing like what Jem should be. For good or ill, reboots have been coming quicker and quicker in Hollywood, so I wouldn’t be surprised if they performed a reboot quickly. If it’s as bad as we’ve been witness to thus far, I hope they don’t use the second movie to “fix” the first one, like they did with GI Joe. If Hasbro were smart, they would have made their intellectual properties into movies the same way Marvel has. They should be able to weave in and out of their brands fluidly. I could live with GI Joe being a fun popcorn movie about a bunch of specialists from all walks of life coming together to dismantle a terrorist organization. Cobra could find the Allspark that Megatron was seeking out, warring with the Autobots in a recent Transformers reboot. Meanwhile, Cover Girl (a former model) and Rock N Roll could have returned from a music festival where Jem and the Holograms, the Misfits, and Cold Slither were performing. Once Miles Mayhem, an agent of Cobra, steals the Allspark for one of Megatron’s minions and forms their own faction called VENOM, a small contingent of Transformers could work with GI Joe and become a subgroup called M.A.S.K., with each vehicle being a triple changer. While many templates were at Jon Chu’s disposal, he went with… what we saw in the trailer.  I will never understand the concept of trying to rewrite a beloved story (to the point of being completely unrecognizable) in the vain effort of casting a wider net, alienating the audience from the elements that made the story so great in the first place.  More insulting is that the people making these decisions were child’s age when the original show was out, so you’d think they’d know better. Don’t get me wrong: it could be a good movie, but rewriting Cinderella as The Little Mermaid does not make it Cinderella anymore. Hollywood never learns their lesson. Simply put: this is not Jem.