X-O Manowar #1 Has a 2nd Printing On The Way

Valiant just posted a press release with some great news – not only have they sold through the entire first run of X-O Manowar #1, the second printing will hit shelves in June with a brand new wraparound variant cover.  In case you missed our coverage of the book, I was impressed to say the least.  Check out the full press release from Valiant, which includes the release dates of their upcoming titles and a hi-res shot of the slick new variant cover of X-O:

Valiant is proud to announce that X-O Manowar #1 has sold out at the distributor level, rocketing through its initial print run of 45,000 copies. Due to demand, Valiant is going back to press on the first issue of the all-new Valiant Universe for the X-O Manowar #1 Second Printing Wraparound Variant – featuring a never-before-seen cover by rising star Arturo Lozzi!
“We’ve been telling the industry for months that Valiant would have everyone talking in 2012, but these figures have exceeded even our expectations,” said Publisher Fred Pierce. “We can’t thank the retail community enough for the massive support they’ve shown us, and this sellout speaks volumes about the amazing job our creators are doing with this series.”
From the creative team of New York Times bestselling author Robert Venditti (The Surrogates) and Eisner Award-winning artist Cary Nord (Conan), X-O Manowar #1 is the first title of the publisher’s summer 2012 relaunch and heralds a new beginning for one of Valiant’s all-time best-selling heroes. And the Summer of Valiant has only just begun!  Fans and retailers take note – Harbinger #1 arrives on June 6, and will be followed byBloodshot #1 on July 11, and Archer & Armstrong #1 on August 8.
“This is an outstanding performance for an independent publisher, especially with a debut title. We look forward to great things from Valiant in the months and years to come,” said Bill Schanes, VP of Purchasing for Diamond Comic Distributors, Inc.
“The success of this book is due in no small part to Rob and Cary’s phenomenal work, and our staff deserves a big round of applause as well,” said Valiant Chief Creative Officer Dinesh Shamdasani. “Warren, Fred, and the rest of the team spent months making sure Valiant’s return would make as big an impact as possible.”
“Valiant has never underestimated the resonance that its characters have with comics fans around the world,” added Valiant CEO Jason Kothari. “X-O Manowar #1 has already taken a lot of people by surprise, and, with Harbinger #1 and Bloodshot #1 just around the corner, this is truly going to be a summer of Valiant.”
Now’s the time to witness the epic beginning of Valiant’s return all over again! Jump onboard the summer’s hottest new series when the X-O Manowar #1 Second Printing Wraparound Variant arrives in stores everywhere on June 20th!
X-O MANOWAR #1 SECOND PRINTING WRAPAROUND VARIANT – ON SALE JUNE 20th!
Written by ROBERT VENDITTI
Art by CARY NORD
Cover by ARTURO LOZZI (APR128197)
$3.99/Rated T+/40 pgs.
X-O MANOWAR #2 – ON SALE JUNE 6th!
Written by ROBERT VENDITTI
Art by CARY NORD
Cover by JELENA KEVIC-DJURDJEVIC (APR121257)
Variant Cover by ARTURO LOZZI (APR121258)
$3.99/Rated T+/32 pgs.
HARBINGER #1 – ON SALE JUNE 6th!
Written by JOSHUA DYSART
Art by KHARI EVANS
Cover by ARTURO LOZZI (APR121252)
Pullbox Exclusive Variant by MICO SUAYAN (APR121253)
Variant Cover by DOUG BRAITHWAITE (APR121254)
QR Voice Variant by JELENA KEVIC-DJURDJEVIC (APR121255)
$3.99/Rated T+/32 pgs.
BLOODSHOT #1 – ON SALE JULY 11th!
Written by DUANE SWIERCZYNSKI
Art by MANUEL GARCIA & ARTURO LOZZI
Cover by ARTURO LOZZI (MAY121309)
Pullbox Exclusive Variant by MICO SUAYAN (MAY121310)
Variant Cover by DAVID AJA (MAY121311)
Variant Cover by ESAD RIBIC (MAY121312)
$3.99/Rated T+/32 pgs.
ARCHER & ARMSTRONG #1 – ON SALE AUGUST 8th!
Written by FRED VAN LENTE
Art by CLAYTON HENRY
Cover by MICO SUAYAN
Pullbox Exclusive Variant by CLAYTON HENRY
Variant Covers by DAVID AJA & NEAL ADAMS
$3.99/Rated T+/32 pgs.” 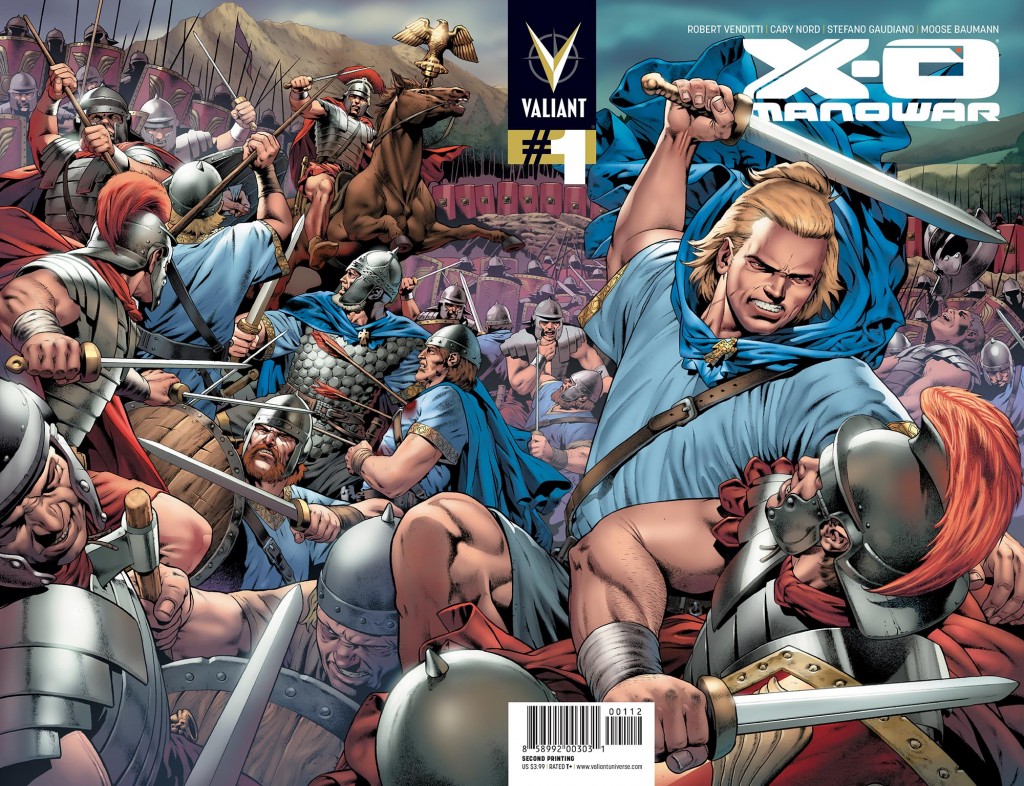