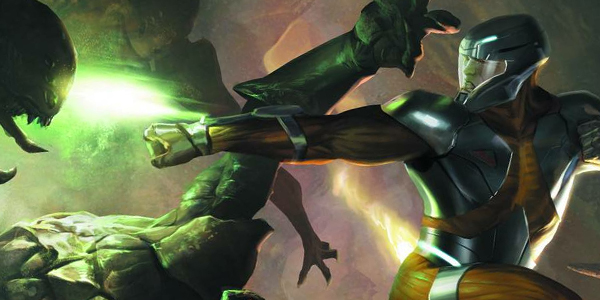 The second installment of Valiant’s X-O Manowar relaunch hits shelves on Wednesday, June 6th and, while I typically try to avoid giving accolades to a series so early in its run, it’s already become one of the most fun and entertaining titles I’ve read in years.  Only two issues in, writer Robert Venditti has crafted an exciting, perfectly-paced narrative brought to life by Cary Nord’s superb visual flair.  The new X-O Manowar has already displayed a charm and relevance that rivals, if not exceeds, the original and I couldn’t recommend it more strongly.

This issue opens with a brief flashback as our protagonist, Aric of Dacia, remembers his wife, Deidre, before being thrust back into the reality of his current situation – imprisoned aboard an alien vessel in deep space by a race known as the Vine and forced into slave labor.  It soon comes to light, through depictions of the human slaves’ plight while toiling endlessly to keep up the aliens’ botanical fields, that the Vine worship plant life and model their society around its influence.  It’s an interesting concept carried over from the original series and one that I hope they continue to explore.  As one slave began to touch on in this issue, plants are a relentless force of nature that will slowly but persistently grow and extend their outreach.  Aside from this bit of information though, the Vine and their intentions are largely still a mystery that will likely unfold over time.  All you really need to understand about the series’ villains for now is shown through their oppressive actions.  Regardless of their motivations, the Vine’s brutal treatment of their prisoners and the boorish language they use to address them (which the human slaves have no way of understanding) is enough to make you want them dead – and this simplicity is actually where the book succeeds so well. 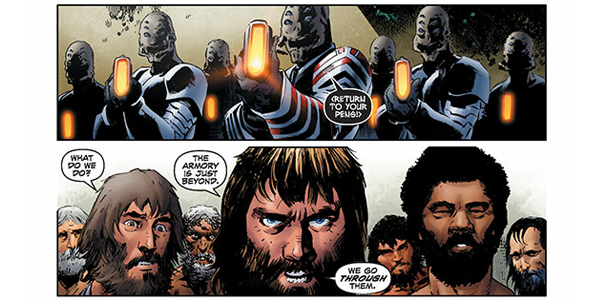 The classic good vs. evil theme is so accessible but sophisticatedly presented and the sharp, sometimes poignant writing really makes the book stand out.  Aric’s die-hard spirit and desire for freedom is something readers can totally get behind and, by the end of issue #2, even newcomers will find themselves rooting for him.  Venditti doesn’t bog down pages with too much dialogue or narration, instead focusing on a tight script, feeding the reader the necessary information as the story progresses.  And while I’m certainly not adverse to loads of dialogue, the streamlined approach just works so well here, allowing the fantastically effective storyboarded artwork to carry you through the story at a frantic pace.

Speaking of, I absolutely love the artwork of this book.  Cary Nord brings a profound sense of style to X-O Manowar complimented beautifully by Moose Baumann’s vibrant color work.  Each character’s facial expressions convey a real sense of emotion and his use of dynamic angles and perspectives makes every panel look like it could be instantly translated to an awesome action movie (make it happen, Valiant!). 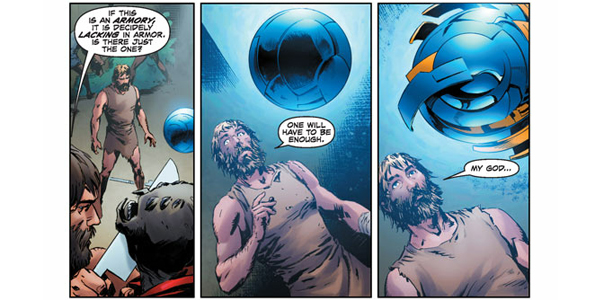 This preview panel was actually altered from the final release version to avoid a spoiler. That's pretty "handy"!

Really, this book has everything going for it and I urge you to check it out ASAP.  Whether you’re a fan of Valiant’s original series from nearly 20 years ago, a casual reader, or new to comic books altogether, this title features the phenomenal artwork, universal themes, and thrilling script that make comics fun to read.  Pick up a copy this Wednesday (along with X-O Manowar #1 if you haven’t already) and, while you’re at it, check out the debut of another relaunched Valiant title, Harbinger #1, the same day – it’s sure to be a knockout.