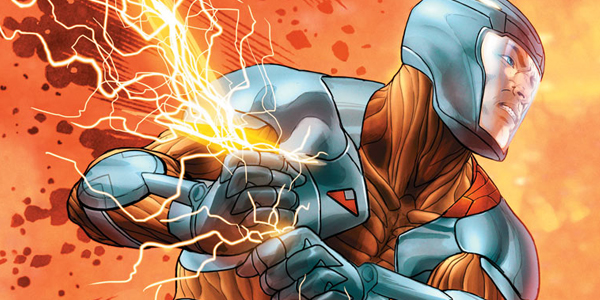 Next week’s much-anticipated issue of X-O Manowar is nearly here and it’s utterly brilliant.  Laced with tragedy and filled with explosive action, this book demands your attention all the way to the heart-pounding cliffhanger ending.

Following the events of the last issue, Aric of Dacia finds himself back on Earth but displaced from his own time.  Instead, arriving sixteen centuries after his abduction by the alien race known as the Vine.  Everything he has ever known and everyone he’s ever loved is long dead and the world is a very different place.  Writer Robert Venditti and penciler Lee Garbett (who is taking over for Cary Nord for this story arc) do a phenomenal job conveying the pain, anguish, and frustration that Aric is experiencing here.  Fleeing to the seclusion and serene peacefulness of the Amazon River in Peru, he uses an unearthed Visigoth hilt to shave is facial hair while conjuring up heartbreaking memories of his beloved wife.

Meanwhile, the Vine’s sleeper operatives on Earth won’t give Aric a moment’s peace and conspire to hunt him down and capture Shanhara, his powerful X-O armor, before the Vine’s fleet and colony ship arrive to stage a full-scale invasion of our planet.  They are promised a Xanadu for the successful completion of their mission…and  severe punishment for their failure.  Their first attempt to take the armor by force fails miserably however, as our hero is in no mood to be bothered.  The ensuing sequence is pure visceral joy — Aric proves that, behind his technologically advanced battlesuit, he’s still every inch a hardened warrior and pulls no punches with his most unwelcome guests.  Realizing the need to rethink their strategy, the Vine agents turn to a man they’ve entrusted in the past with jobs that need to be handled with the utmost discretion and efficiency…none other than Ninjak (yes!)

Ninjak is most definitely a fan-favorite from the classic Valiant days and his introduction and design are handled perfectly here.  He’s cold and calculating, if not a bit arrogant, and one of the world’s greatest assassins for hire.  The updated costume keeps with the stealthy, japanese-inspired aesthetic, but with added flair and detail that give him a much more formidable appearance than in the past.  Within days, he tracks down Aric, who is busy brutally interrogating the surviving member of the prior attack and learning for the first time that the Vine have infiltrated the human race beginning in the fifth century.  The two share a brief exchange that will leave you on the edge of your seat pining for the next issue.

The creative team is just nailing it on this one — the script is tight and engaging, the visuals are gorgeous, and the panels flow in such a way that you feel like you’re watching an awesome movie.  Easily one of the best books of the year, keep an eye out for X-O Manowar #5 – on shelves September 12th at your local comic shop.  In the meantime, feast your eyes on some preview pages: 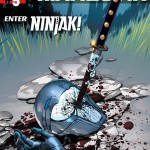 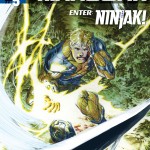 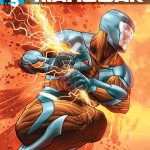 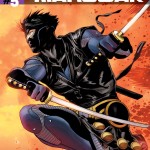 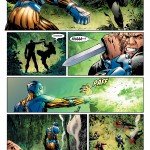 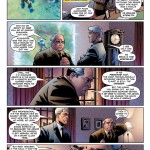 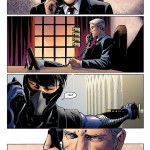 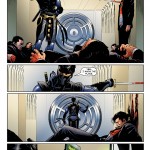 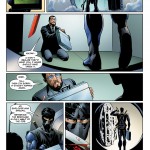