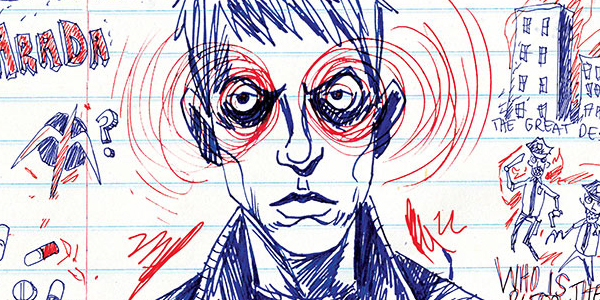 Valiant has a well-deserved reputation for the quality books they bring to the table month after month and this week’s offerings are no exception.  On the verge of two colossal new story arcs, X-O Manowar and Harbinger really kick things into high gear with engaging stories and tons of action. 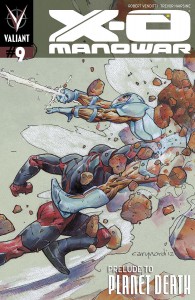 Inching closer to the start of the epic “Planet Death” event, X-O Manowar has been chronicling the hectic life of Aric of Dacia since his abduction by and subsequent escape from The Vine, an alien race who have been planting sleeper agents on our planet for centuries and are able to commune freely through a telepathic bond.  Since his arrival on Earth, Aric has been hunted tirelessly by the Vine’s forces as they seek to reclaim Shanhara, the sentient suit of battle armor that Aric bonded with and used to break free of their deep space vessel.

Thwarted at every turn and even betrayed by one of their own agents, Alexander Dorian, and their hired assassin, the inimitable Ninjak, The Vine have now arrived in Earth’s orbit, ready to wage a full scale invasion and raze everything in their path to ensure Aric’s destruction.  Shortly after a brilliant sequence in which Aric stumbles onto yet another feat his X-O armor is capable of, the Vine are sent into a frenzy and dispatch soldiers outfitted in their own unique suits of combat armor.  What follows is one of the most frenzied, intense combat sequences we’ve seen in the book thus far as Aric clashes head on with Vine forces in a mid-air battle royale.  Even their combined effort seems to pale in comparison to Aric’s warrior prowess until the supremely unlikeable Commander Trill reveals something that may turn the tides of the fight.

This yet another outstanding entry in the series and is topped off with a great cliffhanger ending.  Robert Venditti continues to knock it out of the park with his handling of the franchise and Trevor Hairsine, who takes over art duty on this issue as well as next month’s, made hell of a pretty book – particularly the second half, during the fight sequence, where the action seemed to leap off the page.  X-O Manowar #9 is on shelves now and I urge you to grab a copy. 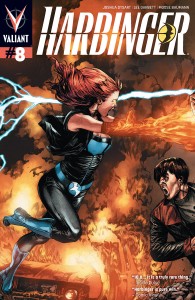 Harbinger has also been a consistently amazing read.  The way writer Josh Dysart handles the characters, each with their share of strengths, weaknesses, and sordid pasts, makes this one a must-read.  The book trades off action and drama with intense character studies that make it feel genuinely real, even while the most unimaginable things happening everywhere. Pete Stanchek, with Kris, Faith, and their newest companion, Charlene in tow, continues his search for downtrodden, seemingly emotionally broken individuals with latent powers to unlock.  While these characters aren’t necessarily “relatable,” readers can instantly get behind their yearning to be something more than what they are.  In most cases, life dealt them a bad hand and you can truly get behind their newfound lease on life after Peter unveils their hidden potential.

Stanchek’s would-be mentor, Toyo Harada, is beginning to learn the predicament he is in as Peter is slowly recruiting these individuals and giving them strength in the fight against Harada’s ideals.  In this case, Pete and crew track down John Torkelson, an invalid whose life consists of lying in bed and being shut out from the outside world.  Shunned even by his older brother, his only exposure to the outside world exists through trash television, which tends to distort how the world really works.  Because of this, in the daydream fantasy world he escapes into, he is represented by a muscle-bound hero who attractive women mindlessly fawn over.  When Peter begins the process of unlocking his latent psionic abilities, we are actually witness to a rather touching scene as Torkelson’s dreamworld “Torque” persona and the real word collide.

He erupts from his room like cannonball shot straight into the sky — and not a second too late, as Project Rising Spirit arrives on the scene to cause a lot of trouble for our heroes.  The issue’s frenetic finale is exciting as hell and artist Lee Garbett, who just finished up his stint on X-O Manowar, lends some of the greatest visuals the Harbinger series has ever seen.  His take on the broad-shouldered, square-jawed, hulking Torque was absolutely perfect.  With the “Harbinger Wars” crossover right around the corner, readers will want to get brushed up on Harbinger, one of the best comics currently running, as soon as possible.  Check out previews of both issues below!