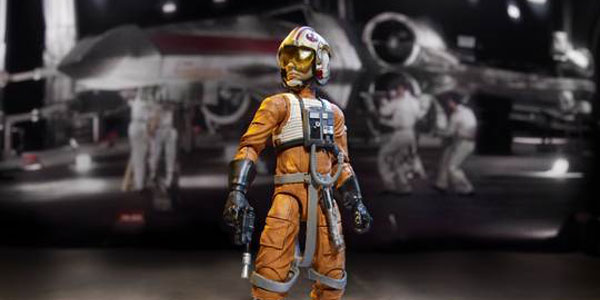 UPDATE: Hasbro has supplied some high-res versions of the Luke Skywalker photos, which you can see in all their glory below.

We’ll likely still have to wait until Toy fair to see the rest of the lineup… so in the meantime let’s speculate on what the inevitable San Diego Comic Con exclusive will be.  With Luke in his pilot uniform and R2D2 in the first wave, I’m betting it’ll be a 6″ scale X-Wing for them to fly in.  That’d be a pretty tempting way to lose a few hundred bucks…

The rumors have been circulating for years– what if Hasbro produced highly detailed, 6″ Marvel Legends-style figures based on Star Wars?  Those rumors got more serious over the past few months, but the company didn’t wait until next month’s Toy fair to make it official– USA Today confirmed we’ll be seeing said 6″ line in 2013, with the first series set to hit in August.

Going under the new label “Star Wars Black,” the new scale will offer two sets of four figures this year, the first of which will include Luke Skywalker in his X-Wing pilot outfit, Darth Maul, R2D2 and an Imperial Sandtrooper.  Derryl DePriest– a Hasbro name any Star Wars of GI Joe fan should recognize– told USA Today “We consider them the best figures that Hasbro’s ever produced for Star Wars that meets the sensibilities of romancing the character as well as the playability and poseability that fans really appreciate.”

He went on to confirm that these figures are being squarely aimed at adult collectors, which isn’t a surprise– Based on the enthusiastic return of Marvel Legends, the collector-oriented revamp of the largely adult collector driven GI Joe movie line, and the recent rift between high quality Iron-Man 3 Legends and a simplified kids’ series, making the split between “kids” and “collectors” seems to be a big part of Hasbro’s strategy this year.  It’s not a bad idea in theory– many of Hasbro’s 2012 lines faultered, even mainstays like Star Wars, and it seemed like their flirting with oversimplification in lines like The Avengers and GI Joe Retaliation (wave one) weren’t doing much good.  The resulting toys were a disappointment to collectors and still too expensive to be adopted by kids, so they got caught in the void in between both fan bases.  A clearly-defined rift between the two audiences could help the toy makers cater exclusively to the changing trends and demands of both customer bases individually. 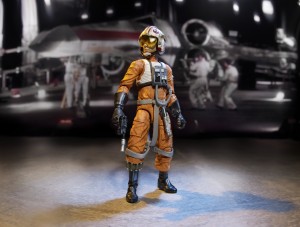 The catch, as we’ve seen in the past, is whether retailers will support a collector-driven line.  Of course, we’ll have online and specialty shops, and Toys R Us is already sporting a large variety of adult collectibles from companies like NECA and Mezco, but will a brand as big as Star Wars carry the weight needed to break into mass retail at collector-unfriendly superstores like Wal-Mart and Target?  Marvel Legends has done so, but they’re still only in select Wal-Mart stores… I’m nervous that a collector-based 6″ Star Wars line would fall prey to the same selective distribution.

But now’s not the time to worry about hypotheticals (we can do that when these guys start to eek their way to stores in July)– now is the time to celebrate!  Fans have wanted this line for years, and based on the product shots Hasbro released of Luke, it looks like DePriest is not being hyoperbolic when he says these will be the best-looking Star Wars toys ever.  And in a move to please everybody, the announcement also indicates the collector-oriented Vintage Collection, with highly articulated and well crafted 3.75″ figures, will also be rolled into the Black label.  We should see the rest of Wave One, and possibly more, at Toy Fair next month, and like Ron at Action Figure Pics hypothesizes, I wouldn’t be surprised to see a pre-launch Comic Con exclusive make its way to San Diego this Summer.

So the news is out, and collectors everywhere can begin to bang those oh-so-familiar Imperial helmet drums to celebrate.  Now comes the fun part… predicting what other figures will make their way to the new 6″ line in Wave Two!  Make your best guess in the comments below…