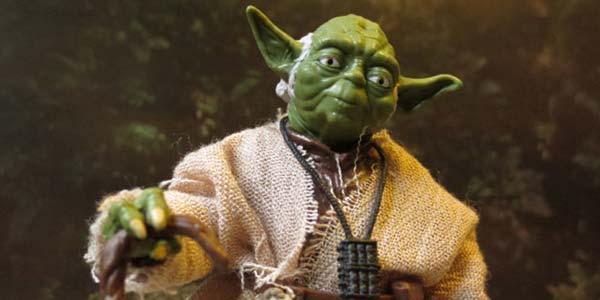 Jedi Master! Yoda! You seek Yoda!  But should you, really?…

The latest releases from Hasbro’s Star Wars Black Series include one of our most unique figures yet– Yoda, the small but powerful Jedi Master.  And based on his disparate size and shape, the sage-like Jedi doesn’t really synch up with the rest of the figure in this collection, in look, feel, or overall quality… making it kind of hard to justify purchasing the figure at all, at this premium price point.

Let’s start with the basics, which are overall good.  The sculpt is really, really ice.  This looks like Yoda– the real Yoda, the puppet Yoda– thanks to Hasbro’s wise decision to keep their Jedi Master grounded in the Original Trilogy (for the most part).  Specifically, this seems like Empire Strikes Back era Yoda… while he has all the wrinkles and aged-ness he should, he also features an impish personality hidden in the portrait, just like in his debut appearance on the big screen.  And Yoda clocks in just about 2.75″ tall, making him the perfect height for the 6″ scale Black Series.

I love most of Yoda’s accessories, too– he sports his ever-present walking stick, along with a Dagobah snake that drapes over his shoulders (a nice nod to the vintage figure), as well as his blissl.  He also includes his lightsaber, in case you wanted to make your Yoda incredibly lame, as seen in the Prequel Trilogy.

Like Darth Vader before him, there is a LOT of soft goods on Yoda.  His entire outer robe is cloth, and it covers virtually the entire figure.  Me, personally, I’m okay with it.  The burlap-like material used on the figure is a good surrogate for the ratty cloth seen in the movie, and the robes fit and drape well over the figure.  Plus, the cloth robe masks virtually all the figure’s articulation, for better or worse, without inhibiting his range of motion.

I guess the cloth robe would be enough to bend some collectors out of shape, but I think it’s just fine.  Less fine, though, are the limited and sometimes downright confusing decisions Hasbro’s design team made in terms of Yoda’s articulation.  As previously established, I truly believe Yoda is lame when he’s fully able-bodied, so he doesn’t need to have the most super-articulated figure in history.  But this little guys gets such an odd mix of moving parts, I was left more confused than anything. 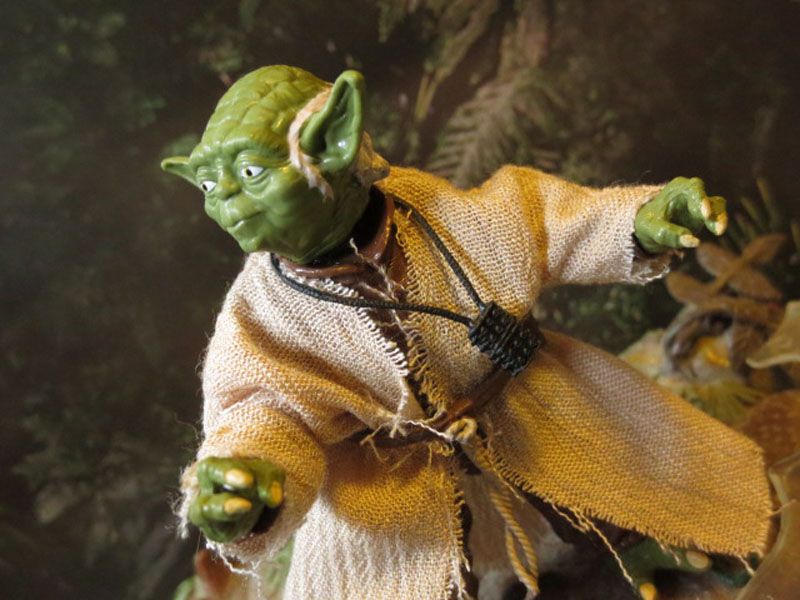 Gone are the half-ball elbows seen on every other figure in this line… instead Yoda gets some very nice double joint elbows… but no bicep or forearm cuts.  This means he can bend his arms deep… but can’t turn them laterally.  That sucks, especially for the few poor souls who’d like to pose their Yoda with his lightsaber (good luck)… or even feature him leaning with both arms on his cane.  But no matter how disappointing the arms are, at least they get articulated… Yoda’s legs sport no knee articulation at all, just hips and ankles.  While these parts have some range, the missing knees truly limit what can be done with the figure… especially if you’re looking for any natural movement.

And while I like the range on the ab crunch of the figure, the ball joint head is just strange.  Rather than feature a neck peg connecting to a socket inside the head, Yoda’s head and neck is a single piece, attached to a ball sticking out of his collar.  This isn’t the worst decision– it keeps Yoda’s turkey neck intact– but the layout is off, so if you pose the figure looking up (as a three foot character surrounded by giants often would) the ball and socket are plainly exposed, affecting the silhouette of the figure.

Some collectors are already planning to boycott this figure based on his design flaws.  I don’t think he’s quite bad enough to warrant that, personally… but I’d love to know exactly why Hasbro’s team made some of these choices.  While this most definitely isn’t the “ultimate” Yoda that we all wanted for the Black Series, I can say his sculpt is very nice and he sports some good accessories.  We have a nice stand-in– one that looks very good amidst his fellow 6″ scale Star Wars figures as long as you don’t pose him– until the day we (hopefully) get a more well-designed improvement.  For me, part of the value of the higher priced Black Series is that each figure is, essentially, the definitive toy of the character.  For the most part, Hasbro has been right on, but we now have Darth Vader and Yoda, two heavy hitters of the Star Wars universe, both in need of remakes.  Which is kind of a shame.

Our friends at Mike’s Comics N’ Stuff have Yoda and the rest of Star Wars: The Black Series 6 in stock now.  Click Here to order yours today. 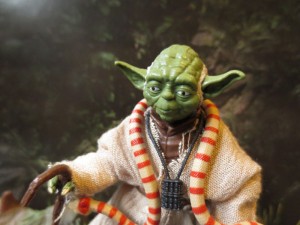 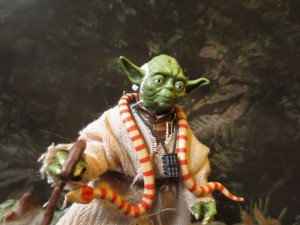 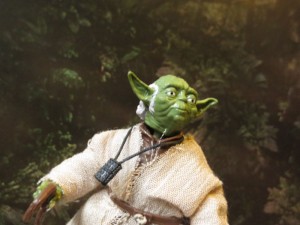 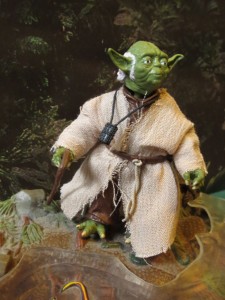 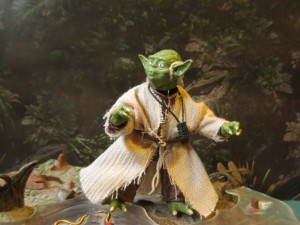 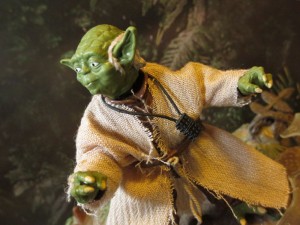 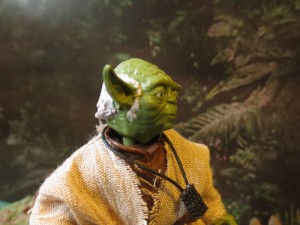 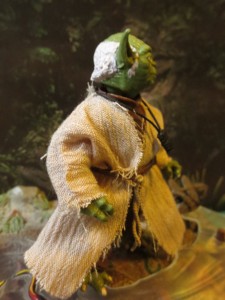 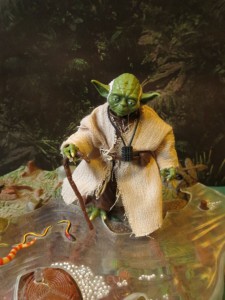 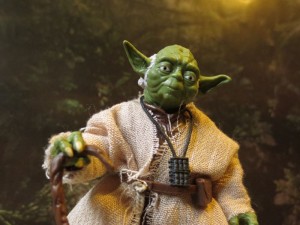 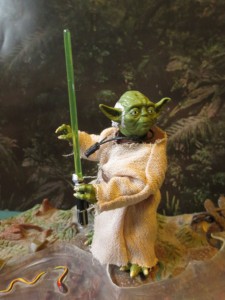 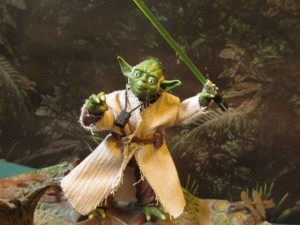 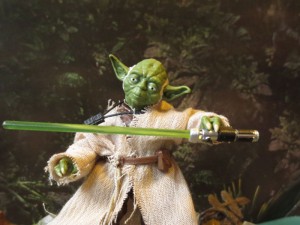 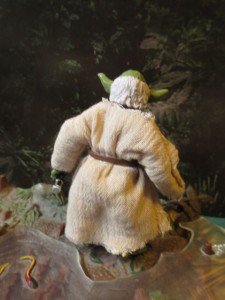 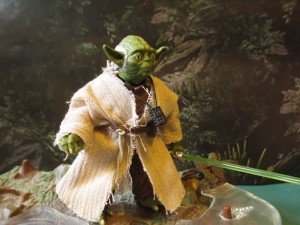 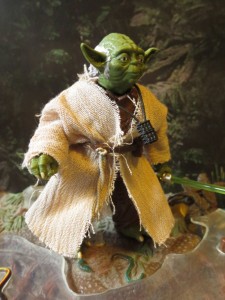 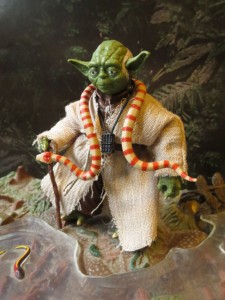 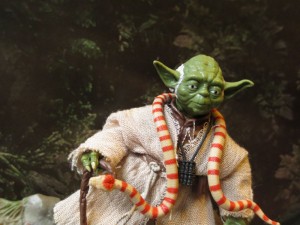