You’re Next Is The Best Horror Movie Of The Year 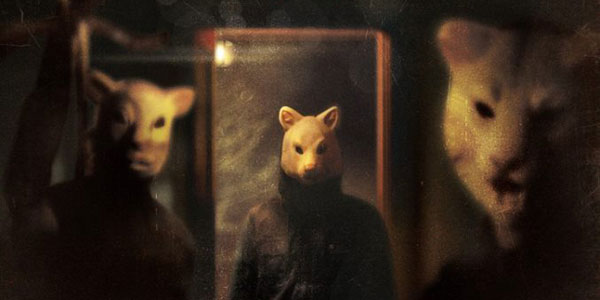 Smart, tense and incredibly entertaining, You’re Next is a must see for any scary movie fan.

It seems like about once a year we are treated to a breath of fresh air in regards to horror, and the crowning achievement of 2013 is You’re Next, a very clever and uncannily fun home invasion movie.  By keeping things skewed just outside of expectations– and with a wicked black comedy streak– this is the freshest scary movie I’ve seen since Cabin in the Woods.

The setup is simple– a wealthy but entirely dysfunctional family is meeting up at their lakehouse to celebrate the anniversary of the parents.  But the festivities quickly fall apart, as the bickering siblings, their folks and their significant others are besieged by three masked attackers, who seem intent on killing everyone in the house.

There’s a lot f twists and turns to the plot of You’re Next, and to spoil any of them would be a crime… in the movie they play out so well, even the ones you should have seen coming feel like genuine shockers.  But more than the surprises, what makes You’re Next so damn effective are the characters.  We’re introduced to a big batch of soon-to-be victims, ten in all, but they are all presented as believable and recognizable people– it’s easy to like virtually all of them, which is one of the missing pieces to so many lesser horror films.

Horror icons past and present like Barbara Crampton and Ti West show up, along familiar faces like AJ Bowen, but this movie belongs to Sharni Vinson as our hero Erin.  Erin is the film’s secret weapon, in terms of the plot and also why everything works so perfectly.  The seemingly charming grad student is revealed to have been raised by a crazy survivalist father, and her training becomes deadly obvious as soon as the three masked invaders begin their attack.  Half the fun of the progress of the movie is the slow evolution from a cat and mouse, to cat and other cat game that’s being played, and Vinson gets plenty of legitimately badass moments that earn her the heroine lead, rather than simply have it cast upon her.  She’s seriously Ripley or Sarah Connor level capable here, and each table she turns on the killers is an absolute thrill.

The trio of killers present a great threat, as well.  Decked out in black tactical gear and creepy Tiger, Fox and Lamb masks, these guys are brutal and typically efficient in their murderous methods.  The kills in the movie are both brutal and over the top, although not excessively gory, necessarily.  Instead, the brutality comes in knowing that the victims are decent people, ones we have connected with early on in the story.  The over the top angle is more straightforward… There are some very inventive traps and kills here which are shocking as they are darkly funny, like the result of a kid mashing his Star Wars figures together until one of their arms tears off.   It’s chaotic, and the results typically generated an equal amount of gasps and laughs– often at the same time.

It’s tough to talk about the story of You’re Next, as this really is a “less you know, the better” kind of movies.  I will say the film plays incredibly well for a crowd– I was in a room packed full of typical theater talkers who chatted up a storm during the first ten minutes.  But by the time the family had gathered and the first attack happens, the talking had died completely.  It was shortly replaced by laughs and winces and quite a few “Oooohhhhh”s, and by the end a number of cheers and applause.

You’re Next is a fun movie, a smart story, and a perfect flick to see in a packed theater.