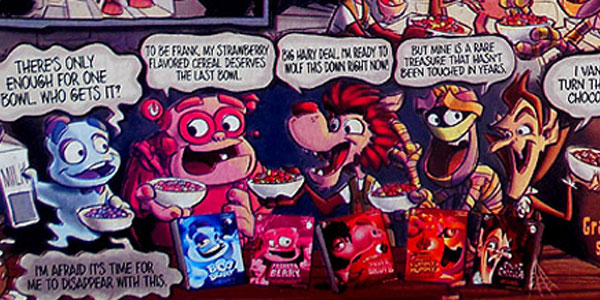 The cereal gods have smiled upon us, and granted our darkest of dreams.

For the past few years, one of the very best Halloween treats has been the seasonal return of General Mills’ monster cereals– around mid September each year, those deliciously sugary ghouls Count Chocula, FrankenBerry and Boo Berry are resurrected, and my first bowl of them (all three mixed together, obviously) is one of those milestones that says YES– it’s Halloween season.

Now the trio of monster cereals won’t be coming back alone… their long-dormant cohorts Fruity Yummy Mummy and Frute Brute are finally returning to store shelves this Fall!!!  I guess we’d be considered a niche market of a niche market, but for fans of monster-themed cereals, this is about as major an announcement as can happen.

It’s been so, so many years since I tasted the original Yummy Mummy and Frute Brute, that I can’t even recall if the new flavors (cherry for the Brute and orange for Mummy) are accurate to the classics but I don’t care.  The charm of these two mythical monster cereals goes way beyond whatever they taste like (sugar, I’m guessing) and into something deeper and more primal than that… We have ghosts, and vampires, and monsters and now mummies and wolfmen… that’s a major corner of the horror genre covered, in cereal form!!!

To further enhance the retro appeal of these cereals (old and new), Target will apparently be releasing exclusive vintage packaged versions of all five.  I buy this rumor, since we’ve seen them sell retro boxes of Lucky Charms and other cereals in the past, and because Target has been a go-to resource for monster cereals in years past.

In all my years, I never imagined I’d be reporting about the return of Yummy Mummy, but here we are… General Mills is certainly doing their part to make this a Halloween to remember, and for that, we thank you!!