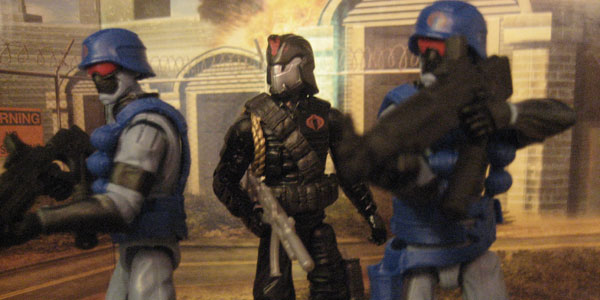 We’re only a few weeks away from the release date of Hasbro’s GI Joe Retaliation toy line, but some shipping snafus meant some figures were shipped early via toysrus.com, and I was lucky enough to score Zartan and the Cobra Trooper before they were pulled from the website. Check out a sneak peek at both villainous Cobras in their latest figure versions! 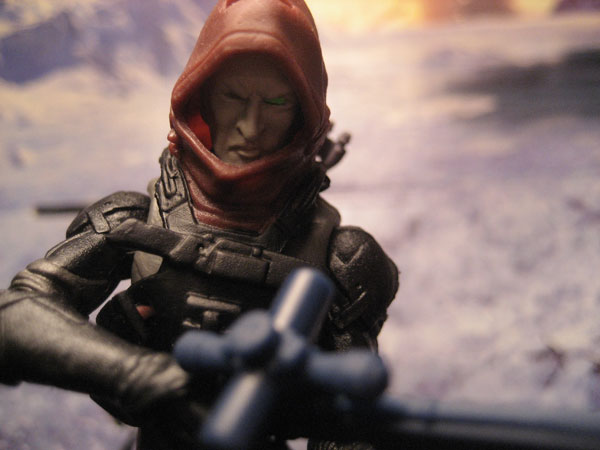 It’s been kept under wraps exactly what Zartan will look like in GI Joe Retaliation (when he’s not disguised as the President of the United States), but I doubt he’ll look much like this figure– many of the first wave Retaliation figures were designed and manufactured before the movie’s final designs were squared away, so Hasbro is offering these guys up as a “concept series,” based on very early movie artwork. 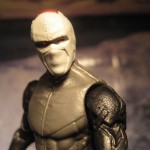 In Zartan’s case, his design is more than a little similar to his main look in the Renegades cartoon series, and it’s very cool of Hasbro to sneak one last Renegades figure to market under the Retaliation banner.

What’s less cool is Zartan sports the new limited articulation that many early Retaliation figures suffer from, and some points of articulation are sorely missed here– the single knees aren’t awful, but the lack of ankle movement really harms this figure, and makes it pretty difficult for him to stay standing. 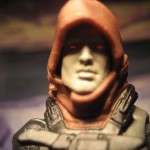 The Amazon preview pack included display stands, but the single-carded figures aren’t so lucky, and this could be a problem for display purposes– it’s a harsh one-two punch to cut stands from the figures and at the same time restrict their ankles making them the least balance-friendly Joes we’ve seen in six years.  I’ve already had a few dozen facedives by the master of disguise before opting to plug him into a leftover stand I had in the parts bin, but having to dip into those extra stands for this entire series could get problematic. 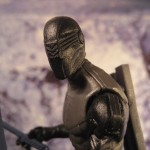 What’s good about Zartan is the sculpt, which is fantastic and full of cool details… the futuristic armor and signature brown hood make the villain menacing in an anime bad guy sort of way (I’m already getting the itch to turn him into the cyber Ninja from Metal Gear Solid), and he’s perfectly passable as a Renegades version of the mercenary. Zartan sports two play features, both of which are very cool– like several past Zartans, he includes swappable “disguised” heads, including Storm Shadow, Snake Eyes and Duke (I think?). 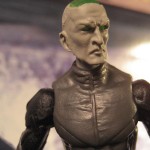 Each head fits well, and the removable chest harness and additional sword sheath backpacks makes his disguise a bit more elaborate than just the new head. The second feature is the old glowing eyes feature for not only Zartan’s head (his eyes glow green), but the red-eyed Storm Shadow and Duke heads as well. In addition to the heads, Zartan comes packing two swords for his ninja disguise, a quiver backpack, crossbow and a pistol which clips onto his harness.  The gear is cast in a dark blue, so while it’s not as realistically colored as I’d like, it’s not as garish as some other Retaliation weapons. 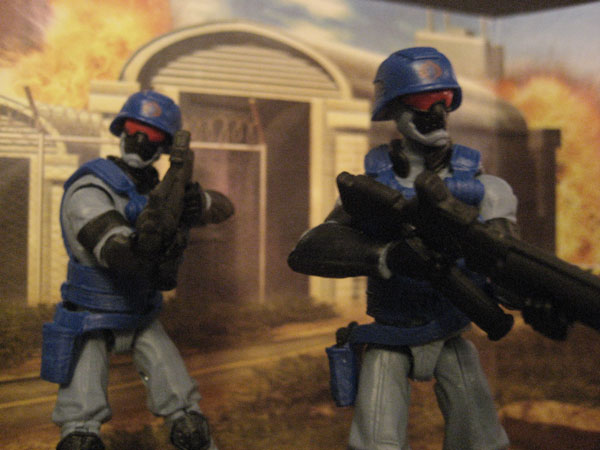 The Cobra Trooper is another mixed bag. I like the look of this soldier builder (although he’s quite off-model from the more realistic Cobra troops in the movie), and he includes removable web gear and a helmet, plus a rather clunky rifle, a handgun and a working parachute. The overall design and color scheme looks great, and can mesh into both the movie line and as a sub-set of the modern/ 25th Cobra forces, but again the single knees and especially the lack of ankle articulation causes him to suffer from both posing and balancing problems which can get pretty grating. The bulky rifle is also pretty large, making it quite tough for the figure to hold it in any practical way. The handgun looks better, and also fits in the holster (in which it is packed– make sure it doesn’t fall out when you take this guy off the card, as that happened to me with one of mine immediately). 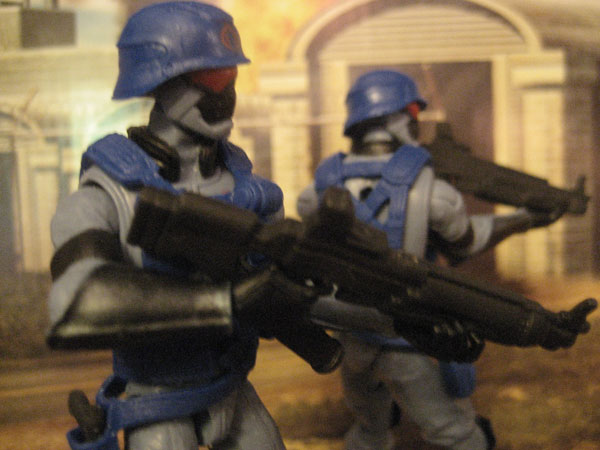 My favorite part of the Trooper is the parachute, which is fun and cool– using the same mold and design as last year’s Captain America parachute figure, it’s a fully-functional piece that works well and is super fun to play with– I can’t wait to toss this guy off my roof a few hundred times this Summer.  And the fact that Hasbro was able to pack this chute (previously only available with the double-priced deluxe Cap) makes for an excellent bargain.  My only quibbles with the parachute are the lack of storage for the cords, which tangle very easily, and the inclusion of the Trooper’s removable helmet.  I have a feeling there will be many helmet-less Troopers by the end of the year, with the small pieces coming loose easily and most likely falling victim to the lawnmower.  I love removable helmets, but it seems odd to include with a figure meant to be thrown around so much. The ideal solution would be a helmet with a chin strap to keep it in place, but if that option didn’t cost out I’d still rather get the extra piece than nothing at all.

If you’ve been reading this site, it’s obvious I’m really into GI Joe, which is why it pains me to keep running these very mixed reviews of the Retaliation toy line. I love Joe and I love Hasbro, and I’m anxiously awaiting the new movie this June. The figures aren’t terrible– they sport some top-level sculpting and some cool play features that are legitimately fun and don’t inhibit the figures as toys. But at this point we’ve all been spoiled, and in comparison to the past six years’ of truly next-level work Hasbro has done with GI Joe, from the 25th Anniversary Collection to Pursuit of Cobra, the Retaliation figures may not be bad… but they aren’t very good either. 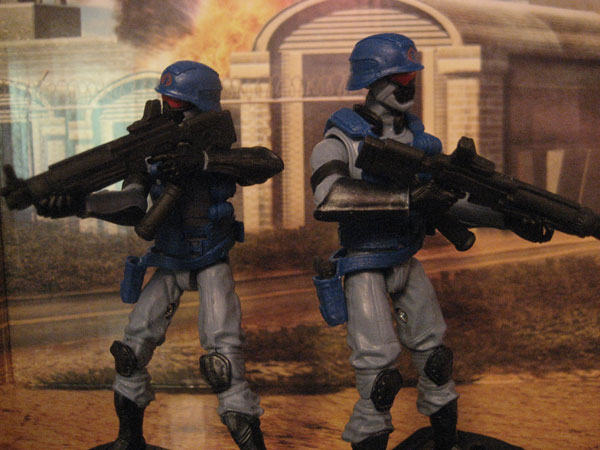 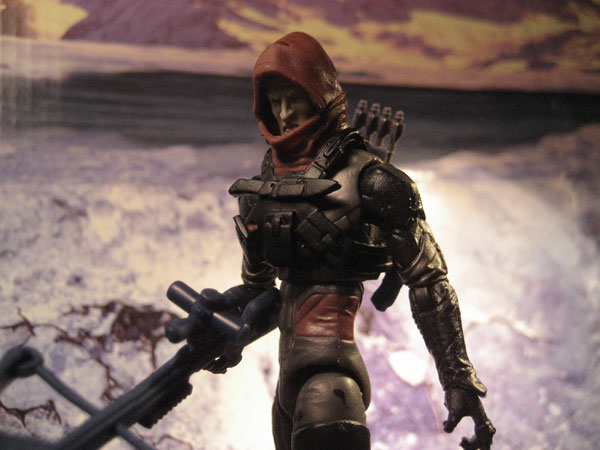 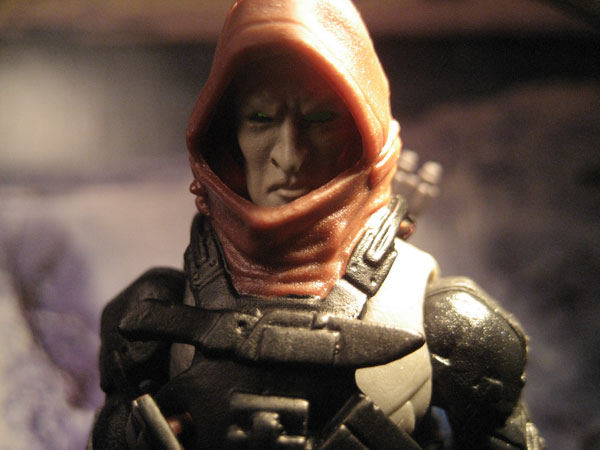 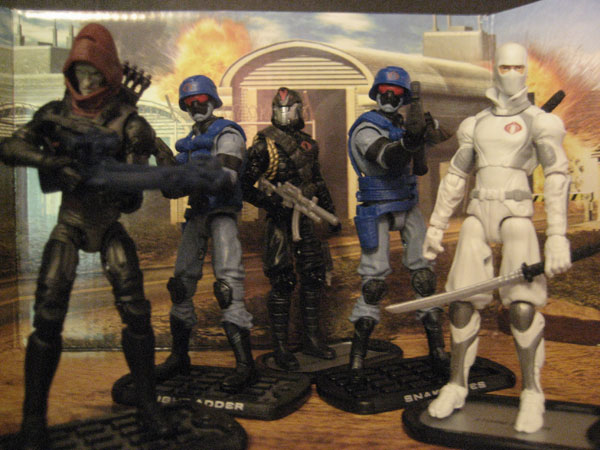